The formalities were completed on Day four of the Boxing Day Test as Australia trumped an under-par West Indian side by 177 runs to clinch the Frank Worrell Trophy with one match in hand. After having made their first impression of the series, with the bat on day three, the Windies batsmen put up another dogged show on Tuesday. At one stage, it even seemed that they would be able to take the match into the final day. Alas, that inevitable batting collapse meant it wasn't to be. West Indies lost their last four wickets for 32 runs as the innings came to a swift end. Nathan Lyon and Mitchell Marsh starred for the hosts claiming seven wickets between them. 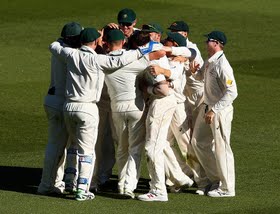 The day began with skipper Steven Smith declaring the innings at the start of play, thus setting the West Indians an improbable 460 to win. Australia had two full days to push for victory, but the declaration was a sure shot sign of the fact that they wanted to get it done with quicker than later. The Windies skipper Jason Holder batted with great resolve to keep the Aussies at bay for the better part of the second half of day four. His fighting half-century was among the few plusses for the visitors in the match. But, with a few overs remaining in the day, he chipped one to mid off, and that opened the floodgates.
Marsh was the man who took the key wicket of Holder. He was impressive throughout, and justified his selection, which was under question going into the match. After all, his brother Shaun Marsh was dropped despite his 182 at Hobart. Lyon had another memorable match, and finished the game with seven scalps. The loop and turn he generated along with his accuracy troubled most of the West Indian batsmen. James Pattinson was fiery, and demonstrated better control over the no-ball. Josh Hazelwood was the culprit this time as a line transgression cost him Darren Bravo's wicket.
Chasing 460 or batting out two days was never going to be West Indies' priority. It was all about how long they could delay Australia's victory. And considering their minimal resources, they did not do badly. Kraigg Braithwaite and Rajendra Chandrika began their defence in credible fashion until the former cut Lyon straight to slip. Bravo joined Chandrika and the two continued to frustrate Australia even as Pattinson had a close lbw shout against Chandrika. Bravo's resistance ended when Peter Siddle got him to edge one behind. Pattinson then trapped Chandrika lbw while Marsh found the edge of Marlon Samuels.
If Australia thought the end was near, they were completely mistaken. West Indies' fightback had only just begun. Holder and Denesh Ramdin got together and featured in a century stand that threatened to take the match into the final day. However, having held fort for 89 balls, Ramdim edged Marsh behind the wickets. 250 for 5 soon became 282 all out as the Windies tail caved in. Australia will go into the New Year Test at Sydney with their 20-year-old dominance over the Frank Worrell Trophy unthreatened.
-- By A Cricket Correspondent