IPL 2015 Final: Mumbai Indians put up an all-round show to outclass Chennai Super Kings by 41 runs in the final at Eden Garden in Kolkata to win the Indian Premier League 2015. Rohit Sharma and Lendl Simmons scored quick half-centuries after losing Parthiv Patel early to power them to a huge 202/5 after being asket to bat by Chennai’s Skipper MS Dhoni. Later they bowled superbly to restrict Chennai to 161/8 in 20 overs and win the IPL trophy for the second time. 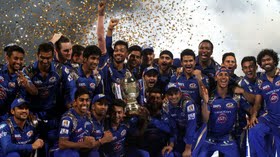 Mumbai Indians put up an all-round show to outclass Chennai Super Kings by 41 runs in the final at Eden Garden in Kolkata to win the Indian Premier League 2015. Rohit Sharma and Lendl Simmons scored quick half-centuries after losing Parthiv Patel early to power them to a huge 202/5 after being asked to bat by Chennai Skipper MS Dhoni. Later they bowled superbly to restrict Chennai to 161/8 in 20 overs and win the IPL trophy for the second time.

The Mumbai captain, who has an ODI world record of 264 and also a debut Test hundred at the Eden Gardens, yet again exploded at his favourite venue. Sharma (6 fours, 2 sixes) and Simmons (8 fours 3 sixes) smashed 19 boundaries in their partnership. After Sharma and Pollard's dismissal in consecutive balls, burly West Indies batsman Kieron Pollard (36) in the company of Ambati Rayudu (36*) led the side past 200. The pitch at Eden Garden has always assisted Kolkata’s spinners so it was expected that Chennai can have upper hand going into the match with three frontline spinners. But none of their spinners were able to get any sort of purchase from the wickets and they leaked too many runs. More than that none of them were able to bowl even the quota of four overs.

Mumbai bowlers complimented the good work of the batsmen as they took the fizz out of the Chennai's chase with a disciplined effort. They straitjacketed the Chennai batsmen, restricting them to 161 for eight as seasoned spinner Harbhajan Singh took key wickets of Dwayne Smith (57) and Suresh Raina (28) in two overs. Kiwi paceman Mitchell McClenaghan (3/25) took three wickets while his Sri Lankan pace partner Lasith Malinga (2/25) scalped two batsmen. Mumbai had won their first title in 2013 at this very venue, defeating the same rivals.

Chennai have now lost four finals (2008, 2012, 2013, 2015) in six appearances. Chasing the huge target, CSK opted to have it easy and concentrated on building a platform after losing Michael Hussey (4) early. Smith and Raina bided their time and looked to consolidate but it meant that they managed only 31 runs from the first six overs. The required run-rate kept on going up and shot past 13 at the midway mark. Smith completed his half-century in 45 balls but only to be trapped lbw by Harbhajan in his penultimate over. Having made a grand comeback into the Bangladesh-bound Test side, Harbhajan completed his spell in style dismissing Raina. Looking to step out, Raina was brilliantly deceived by the veteran off-spinner who bowled a wide ball and Parthiv Patel did the rest behind the stumps. With Hussey, Smith and Raina back in pavilion, and skipper Dhoni not looking in his usual elements it looked as good as over for the yellow brigade who choked in an IPL final for a fourth time. What cost Chennai in this season was the batting form of two of their main Indian batsmen, Raina and Dhoni.

Man of the Match: Rohit Sharma