South Africa captain Faf du Plessis opines that the missed edge of Kane Williamson when batting on 76 was not the turning point of the game and that South Africa was short of runs against New Zealand. The Kiwis beat the Proteas by four wickets in the game at Edgbaston.

In the 38th overs bowled by Imran Tahir, David Miller could not latch on to a couple of tough chances. After that, the South Africans did not spot an edge off Williamson's bat. They did not review. Williamson survived and went on to complete a hundred.

"We weren't aware of it. I think I was at long on at the time, and Quinny is the closest to the action. He's always my go-to man," Faf du Plessis said after the game. 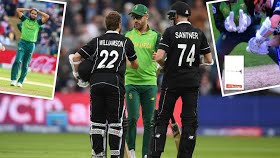 "I just thought it was a plain miss. I just heard about it now at the post-match that he said he had a nick on it. But even Kane said he didn't know he had to fine tune it. He would have referred it. But that's not where the game was won and lost," the South African skipper added.

In a tense contest, New Zealand was losing their way at 137 for 5 courtesy Chris Morris' three-for before a 91-ball stand between Williamson and Colin de Grandhomme (60 from 47) put them back on track.

“It’s just really nice to build those sorts of partnerships with that lower-middle order that was so important, and having that experience in those sorts of situations as a collective is a really beneficial thing,” Williamson said post the game.

“There’s been a number of varying scores throughout this competition. I suppose weather has had a little bit to do with it but we’ve been on a variety of surfaces and it’s been nice that guys have adapted well,” he added.

Williamson faced 138 balls for his hard-fought hundred. Asked to rate the knock, the Kiwi captain said, “I don’t really rank innings, but each time you can try and go out and contribute to a winning performance is something that you’re always wanting to do, and it was nice I was able to achieve that,” he said.