India continued their domination on Day two of the Visakhapatnam Test as they posted 502 for 7 declared on the board courtesy Mayank Agarwal’s maiden Test double hundred and Rohit Sharma’s 176. Ravichandran Ashwin then struck twice with the ball as South Africa ended the day, floundering at 39 for 3.

Resuming the day at 84, Agarwal became only the fourth Indian batsman to convert his maiden Test hundred into a double century. Dilip Sardesai (200 not out), Vinod Kambli (224) and Karun Nair (303 not out) are the only other Indians to have achieved the rare feat.

Significantly, this was the first double century by an Indian opener since Virender Sehwag’s 293 against Sri Lanka at the Brabourne Stadium in 2009. 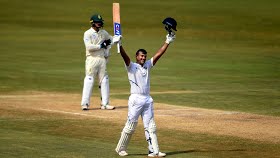 Agarwal’s and Rohit’s 317-run stand was only the third time an Indian opening pair had put on 300-plus in Test cricket. Vinoo Mankad and Pankaj Roy put on 413 runs against New Zealand in 1956 and Virender Sehwag and Rahul Dravid added 410 runs against Pakistan in 2006.

It was also only the 10th occasion when both Indian openers notched up hundreds, previously achieved by Shikhar Dhawan and Murali Vijay in the one-off Test against Afghanistan in June 2018. During the course of his hundred, Agarwal became the 86th Indian to score a Test hundred.

Speaking after the game, an elated Agarwal said he cannot describe how he is feeling. “Glad that I could make my maiden hundred into a double. I am happy with the way I played, I am batting well and if we can keep batting together like this upfront, it will be great for the team. If Rohit and I can keep contributing to make 450-500 every time, it will be very tough for the opposition," Mayank Agarwal was quoted as saying.

Praising his fellow opener Rohit for his innings of 176, Agarwal added, "The way he dominated the spinners was great to see. Initially, the pitch did do a bit with the new ball but when the sun came down it got better and better. As we approached lunch on day two, the ball started keeping low. It started spinning by tea and it is great signs for us.”

Agarwal also revealed the message skipper Virat Kohli gave him as he looked to play a big knock. “Even yesterday when I was batting in the eighties, Virat told me to try and score big. And today, when he walked out to bat, I was batting on 100-plus. His message was the same -- convert it into a big total,” Agarwal stated.