2nd match: Nasir Hossain does a Gurkeerat as Bangladesh A level series

As if taking inspiration from Gurkeerat Singh Mann's superb all-round effort in the opening ODI, Nasir Hossain came up with a dazzling all-round effort of his own on Friday to help Bangladesh A level the three-match series against India A at Bangalore.

As if taking inspiration from Gurkeerat Singh Mann's superb all-round effort in the opening ODI, Nasir Hossain came up with a dazzling all-round effort of his own on Friday to help Bangladesh A level the three-match series against India A at Bangalore. The teams will now head into the decider with everything to play for. Hossain first shone with the bat, coming up with a high-quality century after Bangladesh A found themselves in trouble again. His unbeaten 102 took Bangladesh to a competitive 252 for 8. With the ball, he claimed 5 for 36 in 10 overs as India A crumbled to 187 all out to lose the match by 65 runs. 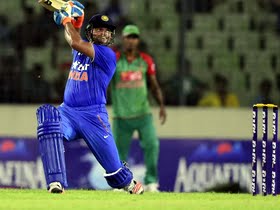 Nasir almost singlehandedly kept the fight alive for the visitors after they lost early wickets. His unbeaten 102 came from 96 balls and featured 12 fours and a six. He looked in no trouble at all against any bowler, be it pace or spin. Had it not been for his knock, Bangladesh A might not have even crossed 200, but Nasir had other ideas. Bangladesh were also lucky that some decent contributions came from the others. Litton Das was good again, making a hard-fought 45, Anamul Haque chipped in with 34 while Soumya Sarkar made a quick 24. For the hosts, Rishi Dhawan claimed three wickets, and Karn Sharma two.

Chasing 253, India began impressively and, at one stage seemed to be cruising to victory, at 119 for 1. From being in the driver's seat though, it all fell apart for them as they crumbled to 187 all out. The two Hossain's -- Nasir and Rubel -- stood out, picking up the nine of 10 wickets to fall. Nasir, it was who broke the important partnership, having skipper Unmukt Chand caught behind for 56. He went on to get the big wicket of Suresh Raina stumped and added the scalp of Karun Nair in the similar fashion. Towards the end, he also dismissed Dhawan and Rush Kalaria to complete his five-for.

Rubel played an equally significant role in the victory at the other end. He had the well-set opener Mayank Agarwal caught behind, and also cleaned up Manish Pandey, who was looking dangerous on 36. The biggest scalp though was that of Sanju Samson, who was clean bowled first ball. Rubel went on to add the wicket of Karn Sharma to finish with four wickets. Al-Amin Hossain claimed the last wicket to fall, cleaning up last match hero Gurkeerat, who made a valiant 34.

The end for India A was in stark contrast to the start. Bowling first, they had Bangladesh A five down for 82 on the board. Rony Talukdar was sent back by Kalaria for a duck. Dhawan got the better of Soumya Sarkar and Momimul Haque for 24 and 3 respectively. At the other end, Karn chipped in having Anamul caught and bowled for 34, and the clean bowling Sabbir Rahman for 1. The rest of the batting was dominated by Nasir. India A seemed to have overcome his onslaught as Chand's half-century led the chase. Alas for India A, Nasir wasn't done yet.