PAK vs ZIM 2nd ODI Preview, Live Scores: Pakistan will now look to close out the series with a victory in the second match, also to be played at Lahore.

Having won the first ODI of the three-match series against Zimbabwe rather comfortably, Pakistan will now look to close out the series with a victory in the second match, also to be played at Lahore. Pakistan put up an excellent batting performance in the first match and although Zimbabwe fought back hard, Pakistan had pretty much batted them out of the game by then. As has been mentioned, this is Pakistan's comeback to international cricket as a host, and they would be desperate for everything to go on expected lines. They have been unbeaten so far in the series. Zimbabwe, on the other hand, have competed, but they would like a victory under their belt. 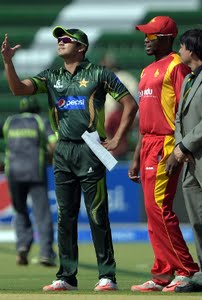 As mentioned above, it was Pakistan's batting exploits that won them the opening match. How pleased the entire setup would be to see Shoaib Malik back among the runs. Without doubt, he has let Pakistan cricket down with his performance in recent years. But, the way he batted a couple of days back, it seemed like he was closest to his best, even though the opposition was Zimbabwe. Pakistan would want him to carry on his good work. Apart from Malik, the others in the batting order also shone. Mohammad Hafeez, skipper Azhar Ali and Haris Sohail all starred for the team with half-centuries as they Pakistan posted their highest total in the country.

While the batting was a big plus, bowling remains a worry for the hosts even if the easiness of the surface is taken into consideration. Wahab Riaz got good purchase from the pitch, and proved that if one was willing to bend his back, there were rewards to be had. Sadly, he was the only one who looked potent during the match as far as bowlers were concerned. The experienced Mohammad Sami was expected to make an impact, at least against Zimbabwe, on comeback. But, he was wayward, to say the very least. Also, Zimbabwe's batsmen feasted on Anwar Ali as he gave them easy offerings. Even Hafeez failed to exercise much control with his spin.

Bowling has been an equally big problem for Zimbabwe during this tour. Had they possessed a decent attack, they could have won at least one of the matches on tour so far, as their batting has been highly impressive. But, the visitors stood thoroughly exposed in the opening ODI. Tinashe Panyangara and Brian Vitori did a decent job early on when there was shine on the ball, but once the sheen went away, they were dealt without much trouble. Prosper Utseya picked up a couple of wickets with his spin though he never threatened. Then of course, there were the part timers, Sean Williams and Sikandar Raza, who were completely taken apart.

If there is one reason why Zimbabwe have impressed on Pakistan soil, it has definitely been their consistent batting. In the previous ODI as well, they finished with a big tally of 334 runs. Captain Elton Chigumbura led from the front with a splendid hundred. Sadly for Zimbabwe, he won't be available as the ICC has banned him for the next two matches over poor run rate. Hamilton Masakadza had also done well with his half-century, and Zimbabwe will be keen for him to carry on the good work. The others like Sean Williams and Craig Ervine also need to keep contributing as they have been doing, for that is the only way they can compete.