India and KKR spinner Kuldeep Yadav has stated that an advice from MS Dhoni helped him regain some confidence after he endured a terrible IPL 2019.

India and KKR spinner Kuldeep Yadav has stated that an advice from MS Dhoni helped him regain some confidence after he endured a terrible IPL 2019. While the chinaman bowler went into the tournament as Kolkata's trump card, he just could not deliver, managing just four wickets in nine games.

Coming as it did in the build up to the World Cup, it is a definite matter of concern to the team. However, Kuldeep has revealed that he got a morale-boosting message from Dhoni to stay confident. 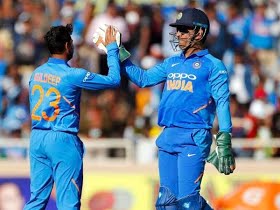 "Mahi bhai (Dhoni) passed on a message that I shouldn’t lose confidence, I need to focus on my game and that really helped me a lot. He has always been a pillar of support ever since I made my debut. People only talk about how he helps us from behind the stumps but it’s actually the work, the advice he gives us in-between or after the matches, that does a world of good,” Kuldeep was quoted as saying in an exclusive interview to Hindustan Times, according to Crictracker.

It may be recalled that Kuldeep broke down on the ground after being slammed for 27 runs in one over by Moeen Ali in a game against Royal Challengers Bangalore. He averaged more than 71 in the edition and just did not look in any sort of rhythm.

“I wasn’t negative but wasn’t positive either at that time. When I was hit for so many runs in that over I was very disappointed. I knew I could get him (Moeen) out and we had a plan too but I just couldn’t execute it. The game slipped out of our grasp because of that over and that’s why I was very emotional,” Yadav was quoted as saying in the interview.

Kuldeep also clarified that he did not make any inappropriate statement against Dhoni and that the 'advice goes wrong' remark was made in good humour, which was twisted by the media for its own gains.