In a match where nearly 500 runs were scored in 40 overs, you wouldn't expect a bowler to end up walking away with the limelight. But, this is exactly what happened in the first T20 between India and West Indies at Lauderhill.

In a match where nearly 500 runs were scored in 40 overs, you wouldn't expect a bowler to end up walking away with the limelight. But, this is exactly what happened in the first T20 between India and West Indies at Lauderhill. After West Indies batsmen murdered the Indian bowlers, the visitors gave back the same treat to the hosts. In the end, it all came down to 8 needed from the last over. India were favourites. But, Dwayne Bravo, known for his death over skills, delivered an exceptional over to concede only six, and ring in the celebrations in the West Indies camp. It was the kind of match neither team would forget quickly for varied reasons.

Bravo brought in all his experience into play, and variations as well to ensure India fell just short. The task wasn't easy for him considering he was bowling at two well set batsmen. Lokesh Rahul had crossed the hundred mark, and was looking in imperious form. MS Dhoni, on the other hand, came in and joined in the fun as well. But, Bravo's last over was something else. He closely followed the batsmen, ensuring he did not concede a single boundary. Even one four would have been enough to take India home. Bravo also played mind games with Dhoni, delaying the last ball for nearly five minutes, and bowled the slower one to outfox the equally wily Dhoni.

Take out the last over, and it was all about a batting feast on Saturday. Incredibly, the two openers from either side, who replaced the regular ones, ended up smashing brilliant hundreds. Ewin Lewis, coming in for the injured Chris Gayle, blasted 100 from 49 balls, bunting five fours and as many as nine sixes. For India, Rahul, who came in for Shikhar Dhawan, eased his way to 110 not out from 51 balls with 12 fours and five sixes. Neither player deserved to be on the losing side, but one had to be. A Super Over would have ended up as a farce since both sides batted superbly. For purely excitement purpose, Bravo's magic was the perfect finish.

While Bravo, Lewis and Rahul were the standout performers of the game, there were a number of equally stunning support contributions from batsmen from both sides. For West Indies, Johnson Charles tore into the Indian attack -- 79 from 33 balls, 6 fours and 7 sixes at a strike rate of almost 240. The opening stand was worth a mammoth 126 in under 10 overs. The two other big hitters, Andre Russell and Kieron Pollard chipped in with 20s each in quick time. For India, Rohit Sharma played his part in India getting off to a stunning start, with 62 from 28 balls with 4 four fours and as many sixes. And while Dhoni could not take India past the finish line, his 43 from 25 was a praiseworthy effort. 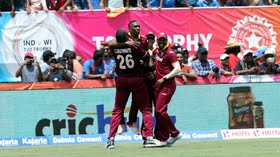 As for the bowlers, this was a totally forgettable match if one takes away the last over by Bravo. The way they were blasted all over the park, it was as if they were in the match only to be hit around. The bowling figures tell a sorry story. Stuart Binny was thrashed for five sixes in the only over he bowled while Mohammed Shami, Bhuvneshwar Kumar, Ravindra Jadeja and Jasprit Bumrah all had economy rates running into double figures. The tale wasn't different for West Indies. Andre Russell, Sunil Narine, Samuel Badree and Carlos Braithwaite, all took a severe beating, before Bravo saved the day.