Steve Smith narrowly missed out on a third consecutive Ashes hundred as he was dismissed for 92. However, the talking point of the match at Lord's was the blow to Smith at the back of the head

Steve Smith narrowly missed out on a third consecutive Ashes hundred as he was dismissed for 92. However, the talking point of the match at Lord's was the blow to Smith at the back of the head, which brought back grim memories of the tragic Philip Hughes incident.When batting on 80, the former Australian captain tried to get out of the way of a bouncer from Jofra Archer. However, he misjudged the length of the delivery, and the rising ball him flush on the neck, missing the helmet. Smith was soon grounded due to the impact of the blow. He received medical treatment but retired hurt taking safety precautions. Only 40 minutes later though he was back at the crease after the next wicket, that of Peter Siddle, fell. He missed out on a third hundred as fell on 92 after leaving a straight delivery from Chris Woakes. Post the match, Australia coach Justin Langer was quoted as saying in a Cricbuzz report that Smith had passed all the concussion tests and was keen on going back to the middle. 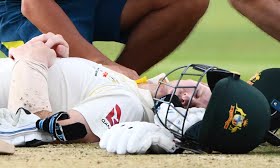 "As soon as he got up in the medical room, it was like 'nah I'm going okay'. Then he had the concussion testing and the doctor came through and said 'he's passed all that and he's pretty good'. By the time he walked back in the dressing room he just couldn't wait to get back out there again," the coach stated.Langer admitted he was himself worried about Smith. "I was saying 'mate are you sure you're okay'. These are like my sons right, so you're never going to put them in harm's way, even though you're always in harm's way with Test cricket. But he's going 'mate, I've got to get out there, I can't get on the honour board unless I'm out batting'. That's what he says," he added.The coach revealed that he constantly kept asking Smith if he was okay, and the batsman kept reassuring that he was fine. "I asked him privately, I asked him behind closed doors two or three times, I asked him in front of the group, he just goes 'all good, all good coach, I'm ready to go, I'm ready to go'. What else do you do? The medical team cleared him, he wanted to get out there," Langer further said in the Cricbuzz report. He did admit though that memories Phil Hughes came back as the late cricketer was struck in a similar arear. "It was obviously some pretty rough memories of a blow like that, so there's no fun in it," said Langer stated.The former Aussie opener also was candid enough to admit that the blow will be on the back of Smith's mind as he faces up to the short ball for sometime from now on. "I can only go from experience. When you get hit, it's always in the back of your mind, no doubt. Any batsman who tells you it's not is a liar. But he is also the sort of person who will do everything from now until the next time he bats, whether mentally or visualising or practising, to be right," Langer said in praise of Smith.--By A Cricket Correspondent