Pakistan's bowlers came up with an excellent all-round effort on day four of the Lord's Test, to claim a hard-fought 75-run victory against England. Resuming at 214 for 8, and looking to set a target in the region of 300

Pakistan's bowlers came up with an excellent all-round effort on day four of the Lord's Test, to claim a hard-fought 75-run victory against England. Resuming at 214 for 8, and looking to set a target in the region of 300, Pakistan managed to add only one run to their overnight total. But, the chase of 283 on the ground, and considering the opposition bowling was always going to be a tough one, as it turned out to be. All the Pakistan bowlers played their part in the victory, although the figures may not reflect the same. As for England, they were constantly behind in the Test, and remained so till the end.

Although Yasir Shah once again starred for the visitors with four wickets, it was Rahat Ali's burst that delivered Pakistan the opening through which they broke in, and secured a victory that would wash away some of the unpleasant memories of the past at the same venue. The target was a challenging one, but a confident start would have given the hosts the edge. Rahat ensured that did not happen. He bowled a brilliant outswinger to send back opposition skipper Alastair Cook. Buoyed by the scalp, he went on to add another two victims in Alex Hales and Joe Root as well. At 47 for 3, Pakistan had got the start they wanted.

With the top three gone, England's middle-order yet again stood exposed. But, James Vince and Gary Ballance batted with composure under pressure. Both players are looking to establish themselves in the team and, as such, had individual goals as well. And, they hung on together to keep Pakistan at bay. The inexperience of Vince got the better of him though as he drove at Wahab Riaz, only to find the fielder in Younis Khan. Under crunch situations, such moments can turn around a game. And, following the dismissal of Vince, Pakistan found another opening to put England back under pressure. 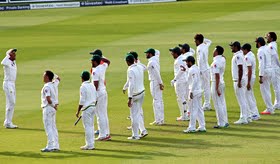 The big problem for England was that Yasir hadn't begun weaving his magic yet. And when he did, he cleaned up the well-set Ballance, as a viciously turning ball beat his attempted glance and pegged back the leg stump. It was the kind of dismissal that reminded one of Shane Warne bowling Andrew Strauss in a similar manner during the 2005 Ashes. Ballance's wicket was soon followed by that of Moeen Ali, whose terrible slog ended up in him being clean bowled in rather embarrassing fashion. At 139 for 6, and with Pakistan bowlers high on confidence, there was going to be only one winner in the Test.

Even as the wickets crumbled, Jonny Bairstow battled on, not giving up in spite of the adverse circumstances stances. He found an able ally in Chris Woakes, and the two blocked and blocked to frustrate Pakistan's attempt to finish off the opponents. But, the defensive approach eventually proved to be Bairstow's undoing as he was cleaned up by Yasir missing a straight ball. With the tail for company, Woakes tried to hit out, but was unsuccessful in his attempt. In a fairy-tale finish, Mohammad Amir got the last wicket, and redeemed himself at the venue where he once shamed himself.