Everyone was comfortable and chilling: Shakib on Bangladesh's chase of 322 against West Indies

Bangladesh has dominated West Indies in ODIs in recent times and the Asian side maintained their ascendancy in the World Cup match at Taunton as well.

Bangladesh has dominated West Indies in ODIs in recent times and the Asian side maintained their ascendancy in the World Cup match at Taunton as well. Chasing down what seemed like a stiff target of 322, the Tigers mauled the Windies as the chase was done and dusted in 41.3 overs.

West Indies' score was built around Shai Hope's 96 and fifties from Evin Lewis and Shimron Hetmyer, the latter's a blazing one from just 26 balls. However, Shakib Al Hasan continued his great run, remaining unbeaten on 124 from 99 balls while Liton Das blasted 94 from 69 as they featured in an unbeaten 189-run stand for the fourth wicket.

At the post-match conference, Shakib revealed that Bangladesh did not feel daunted by the target during the innings break. “At the end of the first innings in the dressing room, no one felt that this was tough. Everyone was comfortable and was chilling. It gave a lot of confidence in the dressing room and belief that we could chase the runs. 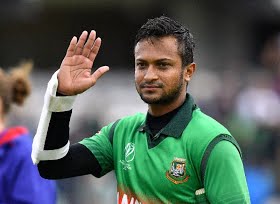 “The way the openers started their innings, everyone in the dressing room felt good and comfortable and relaxed. That helped us a lot. So, at no point of time we had to panic," Shakib said.

The all-rounder now has two hundred and two fifties in the World Cup and is the tournament's leading run-scorer with 384 runs.

On his individual knock, the veteran batsman added, “It's obviously one of the best because the way we chased that run and the way I paced the innings. I was never in a rush. I didn't have to play too many shots from a good ball. I had to be patient enough.

“I needed to make sure that when I played I had to put the bad ball away. And every time I did that quite well. And it's one of the key things in my batting in this chase," he explained.

Shakib was also all praises for Liton Das, who came in and blasted 94 in quick time in his very first World Cup innings. “I told Lipton that if you stay at the wicket then we can finish this game with three wickets down and after 10 or 15 balls, it was a treat to watch.”

“I enjoyed his batting from the non-striker’s and he never put me under any pressure but the way he handled the pressure was brilliant," Shakib further said.

Bangladesh next faces the mighty challenge of defending champions Australia at Trent Bridge on June 20.