World records are destined to be set by only a chosen few, so when Brian Lara reclaimed the world record Test score with an unbeaten 400 in Antigua in 2004, six months after it was taken off him by Australia's Matthew Hayden, something extraordinary was afoot. 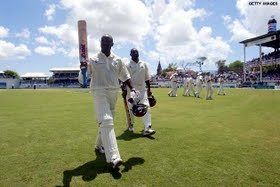 World records are destined to be set by only a chosen few, so when Brian Lara reclaimed the world record Test score with an unbeaten 400 in Antigua in 2004, six months after it was taken off him by Australia's Matthew Hayden, something extraordinary was a foot.

Three-nil down in a four-match series and with his team in disarray, Brian Charles Lara knew he had to do something special in the final Test of England's 2004 tour of the West Indies. Something that would let the world know there was still some pride left in Caribbean cricket. He had to take back his world record.

Returning to Antigua, the scene of Lara's 375 against England a decade before, the West Indies captain was on a mission: to reclaim the highest individual Test score he had lost when Australia's Matthew Hayden scored 380 against Zimbabwe in 2003.

It took him just six months to retain his world recored which Australia's dynamic opener Matthew Hayden broke. Lara's phenomenal unbeaten 400 was only the tenth quadruple-century in all first-class cricket.

The Trinidadian left-hander faced 582 deliveries, hitting 43 fours and four sixes, setting a new benchmark which still has to be broken. It has been seven years and no batsman till date has even come close to breaking the phenomenal feat.

Lara's achievement was a feat of amazing endurance every bit as much as one of skill. He was surely not at the peak of his cricketing career, but he had the ability to score big. Lara's inning was proof of the power of the mind - he was at the wicket for 13 hours and surely it's not a joke to be at crease for such a long time. No man cuts the ball with such precision and along such angles and the way he used the wrists was just amazing.

Brian Lara played one of the classiest innings of his already-illustrious career. Lara become only the second player (after the great Don Bradman) to reach the 300 milestone twice in Tests. The sparkling left-hander was the stand out of the day, blazing balls to all areas of the ground and belting the English attack around without the slightest bit of respect.

The record set by Lara is yet to be broken. So the big question is whether any of this modern generation batsman had quality and patince to be at the crease for long and do the impossible?

The only name that comes in everyone's mind is India's opener VirenderSehwag. The swashbuckling opnener definitely has the class and stroke making to reach this feat. Sehwag already has the second fastest double century in Test cricket that came from just 168 balls against Sri Lanka and he has scored his Test runs at a faster pace than anyone in the history of cricket.

Sehwag is one man who is capable of achieving Lara's 400 run feat. But it won't be easy because it took the legend Lara about 10 years to acheive that figure.