Strong contenders India and England go into a high-voltage cricket Test series at the Lord's on Thursday with the spotlight on Sachin Tendulkar who aims to achieve an incredible milestone of 100 international centuries in a match which has historic significance. 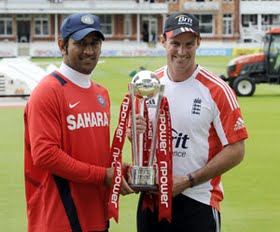 Strong contenders India and England go into a high-voltage cricket Test series at the Lord's on Thursday with the spotlight on Sachin Tendulkar who aims to achieve an incredible milestone of 100 international centuries in a match which has historic significance.

The first Test between number one team India and third ranked England at the hallowed Lord's can be termed as a statistician's delight for the sheer milestones in waiting.

The series opener happens to be the 100th Test between the two sides and also the 2000th in the history of the game.

If that was not enough, the historic venue could also become a witness to Sachin Tendulkar's 100th international century in his 22nd year in Test cricket as the champion batsman is just a ton away from achieving the feat. But leaving aside all the historical importance associated with the Test, the four-match series is also touted as a fight between two best teams of the world for Test cricket's top position.

The fickle English weather, however, could play spoilsport as rain is predicted on all the five days of the match which has generated a lot of interest. While India would be desperate to do whatever it takes to hold on to its numero uno Test status, a series win by a two game margin will see England topple Mahendra Singh Dhoni's men from the pinnacle.

But against a formidable side like England, who have been unbeaten in the last five series at home, it won't be easy for the Indians, who did very little to impress in the drawn practice match against Somerset at Taunton. Barring Suresh Raina, who hit a ton, the stars of India's famed batting line-up, including Tendulkar, did little justice to their reputations, while the bowling department came a cropper accounting for just five Somerset batsmen in two innings.

But what would worry Dhoni more would be the failure of his experienced batting line up, which includes the likes of Gautam Gambhir, Tendulkar, Rahul Dravid and VVS Laxman.

Tendulkar would be pivotal to India's batting in the absence of Virender Sehwag. Together with Dravid and Laxman, the champion batsman has shared over 35,000 runs in Test cricket and India's fate in the series would largely depend on the trio's performance against a potent English attack.

Since December 6, 2009 when India became number one Test team, Tendulkar has scored 1722 runs from 15 Tests. But the great man's record at Lord's is far from rosy with 37 being his highest at the 'Mecca' of cricket. And Tendulkar, who did not play a Test since January this year, would have do much better to not only help his but also his side's cause.

But against a fiery English pace attack what India need is a strong star from their openers -- inexperienced Abhinav Mukund and Gambhir, who returned to the team after missing the West Indies tour due to a shoulder injury. Dravid, who failed against Somerset but looked in form in the Carribean, is expected to hold on to one end, while Laxman's is high on confidence after three half centuries against the West Indies.

Skipper Dhoni might have come under the weather on the Caribbean tour and would be itching to contribute with the bat against England. Raina, on the other hand, has more or less sealed his place in the playing eleven ahead of Yuvraj Singh by virtue of his consistent performances in the West Indies and fighting century against Somerset.

On the bowling front, India has been bolstered by the return of Zaheer Khan, who will spearhead the visitors pace attacks alongside in-form Ishant Sharma, who was the man-of-the-series in the Caribbean with 22 wickets from three Tests at a strike rate of 16.86.

Apart from Zaheer and Ishant, the Indian pace attack also has Munaf Patel and Praveen Kumar, who can be lethal on their day.
The spin attack, meanwhile, will be under Harbhajan Singh's charge while giving him company would be leg-spinner Amit Mishra.

The Indian camp will be a bit worried about Zaheer's record in England. In his previous two visits in the country, the left-arm seamer managed only nine wickets at a strike rate of 30.22. If nothing, Zaheer at least is expected to extend his hold over England's left-handed openers Andrew Strauus and Alistair Cook, whom he has dismissed five and three times in Test matches respectively.

But claiming 20 wickets in the match would be a difficult task for the Indian bowlers as they are up against a formidable and much-improved English batting line-up. For the home team it would be a relief to see captain Strauss back among runs. He was hardly troubled by the Indian bowlers en route to his 78 and unbeaten 109 run innings for Somerset.

The duo, since their unbeaten 329-run stand in the opening Test in Australia last year, have had five century and one double century partnerships in the last seven Tests. Cook has smashed five and Trott three centuries from England's last eights Tests.

Even though, critics have pointed out the failures of Strauss and Kevin Pietersen (85 from three Tests), it has been been magnificently balanced by the trio of Ian Bell, Eoin Morgan and Matt Prior who have never failed collectively in recent times. Down the order, Stuart Broad and Swann are also more than handy with the bat.

The present English bowling attack is full with variety, which makes it one of the most fearsome ion the world at present.

The home team's pace department will be lead by three over six feet bowlers -- James Anderson (6'2), Stuart Broad (6'5) and Chris Tremlett (6'7), who have been instrumental in England's 11 victories out of their last 16 Tests.

Anderson would be India's biggest threat due to his ability to swing the ball while Tremlett uses his height to extract uncomfortable bounce from any surface. England's spin attack will be the sole responsibility of Graeme Swann, who is regarded as one of the best in the business.

The 32-year-old off-spinner is an attacking bowler, who has scalped 140 wickets from 32 Tests. As expected, the "home of cricket" is sold out for the historic tie and the ICC and by England and Wales Cricket Board (ECB) has also planned a host of activities, including a parade of former Test captains of the two nations on the fourth day of the match, to mark the occasion.

But the only wrong note in the proceedings can be the unpredictable English summer weather as frequent showers are expected on all five days, the worst being the third day of the match.