Pakistan legend Zaheer Abbas has revealed that while Indian captain Virat Kohli is a great batsman, without doubt, he prefers watching opener Rohit Sharma bat for the serenity and grace he brings with the willow.

“Kohli is a great player, but watching the beautiful strokes that Rohit Sharma possesses gives me a lot of satisfaction. The way he creates a shot is his art, which is something that Kohli does not possess,” Abbas was quoted as saying in an interview on a Youtube channel.

One can pretty much understand Abbas' preference for during his playing days he was rated among the most pleasing batsmen to watch apart from undoubtedly being great.

The former Pakistan skipper went on to add that watching Rohit bat makes him happy. “When he is playing, I never switch off my TV. Kohli is right now India’s backbone but watching Rohit making his strokes makes me happy. Both these batsmen are great to watch,” he added in the interview. 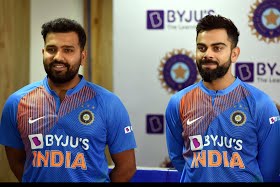 Abbas also praised Indian cricket for putting money in the right areas as a result of which they are among the most successful teams in the world today. “They have a lot of money, but they have also worked in the right areas. They have not made too many changes to their domestic system, which only made it better," he explained.

“Cricket has always been popular in India and they have always produced great players. Unlike us, they have stayed away from falling into politics and jealousy and made a system that took long senior players too so that there is no gap between them and those who replace them,” Abbas went on to add in the interview.

Having beaten Sri Lanka in the T20Is, India now takes on Australia in a three-match ODI series starting Tuesday, January 14. Australia beat India 3-2 the last time these two teams faced off in an ODI series in India, coming back after being 0-2 down.