Team India has a twin reason to celebrate Sunday night. Chasing a target of 187 in the third and final T20I against World Champions Australia, the skipper Rohit Sharma-led side claimed a thrilling win by 6 wickets with gigantic contributions of Virat Kohli and Surya Kumar Yadav at the Rajiv Gandhi International Stadium in Hyderabad. With the 2-1 bilateral series victory, the team registered a milestone achievement of the most number of T20I wins in 2022.

Australia batted first and pocketed 186 runs in 20 overs losing seven wickets. The highest scorers were Tim David and Cameron Green with 54 and 52 runs respectively. Sams grabbed two wickets by sparing 33 runs while Hazlewood and Pat Cummins pocketed one wicket each. 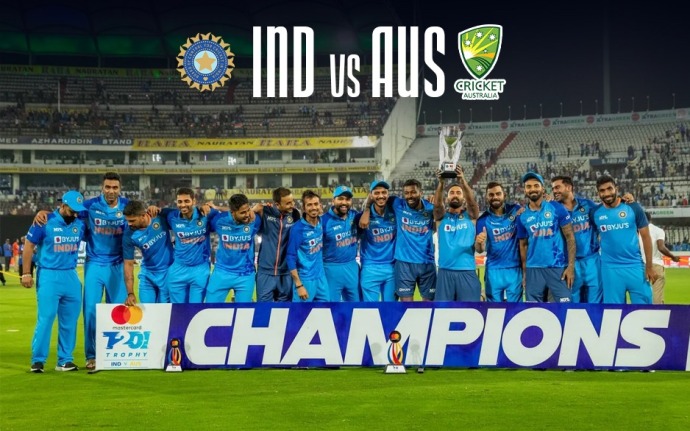 Meanwhile, Twitter has been flooded with congratulatory messages for Team India saying it was a thrilling third T20I and another bilateral series victory. Well done Rohit, Team India and BCCI.

India has won nine successive T20I series since 2007 when he became the captain. The year started with a 3-0 win in February's T20I series against West Indies. The second victory was a 3-0 win against Sri Lanka in a home T20 series. The series against South Africa at Indian grounds ended in a 2-2 draw in June. The final and fifth match was canceled due to rain. The winning continued and the next victories were a 3-1 win against England in July. Ireland was thereafter crashed at their home by 2-0 in the same month, following the England tour. A tour of the Caribbean turned victorious when Team India defeated West Indies by 4-1.

Registering ample wins by August, the team failed to perform as expected in the Asia Cup held in August and September. It finished third in the Super Four matches.

The next game for Team India, ahead of the T20 World Cup, is against South Africa. It will be a three-match T20I series and is scheduled to start on Wednesday (September 28) at Thiruvananthapuram’s Greenfield International Stadium. Fans are expecting the same performance from the Men in Blue.

The ICC T20 World Cup is scheduled to be held from October 16 to November 13 across various cities in Australia. India is to face Pakistan in its first match in the multi-nation tournament on October 23. India failed to qualify for the final four in the previous edition of the T20 WC and was crashed out in the Super 12 phase.