When the fourth day of the Colombo Test began on Tuesday, the match was well-balanced. Rangana Herath's six-for the previous day meant that Australia's lead was restricted to a negotiable 24 despite fascinating hundreds from skipper Steven Smith and Shaun Marsh.

When the fourth day of the Colombo Test began on Tuesday, the match was well-balanced. Rangana Herath's six-for the previous day meant that Australia's lead was restricted to a negotiable 24 despite fascinating hundreds from skipper Steven Smith and Shaun Marsh. By the end of day's play, Australia had already taken out one Sri Lankan batsman with the hosts still two runs in the deficit. The match was balanced on a knife's edge. Day four was thus all about snatching the advantage, and taking the game away. At 98 for 4, it seemed Australia had raced ahead, but a Kaushal Silva century pulled them back.

Thanks to Silva's fighting 115, Sri Lanka finished the day with a significant lead of 288, and the favourites to clinch the Test on the last day, which would give them a historic whitewash against Australia. And, while Sri Lanka would not be wanting to think too far ahead, Rangana Herath and co would be licking their lips for sure. Scoring anywhere in the region of 250 on the last day is a hugely tough ask for any team. And, Australia would be aware of the same in no uncertain terms. While the Aussies would be pleased with the fact that they had two centurions in the first innings, a fifth-day surface would pose a much tougher challenge.

Coming back to day four, it completely belonged to Silva. He went into his last innings of the series under extreme pressure. After all, he hadn't reached double figures previously in the series. And his most recent visit to the crease gave him a blob. Another failure, and his spot in the team would have been under real danger. But, sometimes the worst of situations bring out the best in players. And, this is exactly what happened with Silva. He batted with confidence not displayed before in the series. It was a well-compiled innings. Silva was cautious early on, but once he got his eye in, opened up. Silva was extremely severe on spin, punishing both short and wide deliveries.

Silva's hundred undid a lot of good work Australia had done earlier in the day, in their endeavour to stay relevant to the series. The day began on a promising note for Australia as Nathan Lyon had the struggling Dimuth Karunaratne stumped smartly, albeit in somewhat controversial fashion. A spinning delivery went past the batsman's defence and settled into the hands of Peter Nevill. After a brief pause, the keeper took off the bails as he spotted Karunaratne lifting his foot. There was a debate as to whether the ball was still in play. The umpires decided it was, and Karunaratne's miseries were compounded. 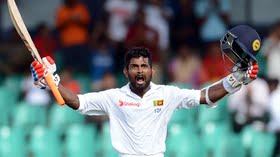 Kusal Perera was also a victim of the referral system, but not in any negative sense. He was given not out to a caught behind appeal off Jon Holland. An attempted reverse sweep went close to his bat's edge, before hitting his body and settling into the keeper's hands. There was no snicko or HotSpot, but the umpire saw and heard enough to overturn the on-field decision. It was hard luck for Perera. There was no such confusion with Kusal Mendis' decision. He was lbw to Mitchell Starc, off a fast, straight delivery. With wickets falling, Silva was in desperate need of a partner. He found a reliable one in Dinesh Chandimal, who contributed a valuable 43. Sri Lanka's fightback had begun, and they did not look back from there.