WC 2015 Pak vs UAE: Pakistan take on the UAE at Napier on Wednesday, their chief motive will be to achieve a dominating win.

The Pakistanis registered their first triumph in the ICC World Cup 2015 against Zimbabwe at Brisbane on Sunday. It wasn't a comprehensive performance by any stretch of the imagination, but the former world champions would be happy to have gotten among the points. As they take on the UAE at Napier on Wednesday, their chief motive will be to achieve a dominating win. It is something their disappointing World Cup campaign desperately needs. UAE, on the other hand, would be keen to put up a fight after a poor showing against India. They know Pakistan can crumble under pressure, and would be keen to catch them off guard. 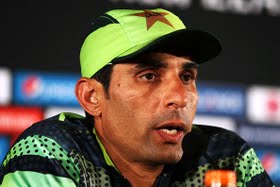 If they want to do well in the series, Pakistan need to show significant improvements in their batting, which has been exceedingly poor in the tournament so far. The top and middle order has struggled, and only a couple of players have actually stood up to the challenge so far. The openers Nasir Jamshed and Amjad Shehzad need to get among the runs desperately. The number three slot is also a big worry for Pakistan. Haris Sohail has looked fluent for sure, but 20s and 30s don't make much of an impact in the 50-over version. Umar Akmal also has been terribly disappointing. For sure, Pakistan are running out of patience in regards to him, but they don't have much option.

Among their batsmen, it has only been skipper Misbah-Ul-Haq who has held things together for the team. With wickets falling around him, he has been forced to play the waiting game, as a result of which his strike rate has suffered. There has been criticism back in Pakistan, with some former player claiming that Misbah is showing selfishness by not batting up the order, and also by not scoring quickly. But, the actual problem is with others, and not Misbah. Take the case of Shahid Afridi for instance, who has hardly scored a run in the series although Pakistan have needed one from him in every game thus far. Lack of runs from Younis Khan has also helped the team's cause.

Pakistan could have struggled against Zimbabwe as well, if only their bowlers had not risen to the occasion. Mohammad Irfan and Wahaz Riaz bowled exceedingly well at Brisbane to ensure that Pakistan somehow got the better of Zimbabwe. Riaz was excellent with the bat as well, and his all-round prowess is certainly a positive for Pakistan, among the very few. Riaz has been unlucky not to have played more for the country. He was impressive in the last edition as well, and has been among the wickets here as well. With Irfan coming to the party, and Rahat Ali also bowling well, Pakistan's bowling seems in decent shape for now.

UAE wouldn't be expecting to win against Pakistan. But, deep down they would know that if there is one team among the stronger sides that can crumble to pieces under pressure, it is Pakistan. UAE would only hope that they can catch the Asian side off guard at Napier. Of course for that, they would need their top players to come up with crucial efforts. From what has been seen of them, Shaiman Anwar will be the key to their performance with the bat. Among others, all-rounder Amjad Javed, Khurram Khan and the middle order will have to fire. In the bowling, Mohammad Naveed and skipper Mohammad Tauqir will need to do well. If that happens, you never know, an upset may be in store.