It doesn’t matter how evenly matched many thought the two teams were, if Mitchell Starc bowls in the rest of the matches like he did in the first ODI against the West Indies, it will be a most one-sided series.

It doesn’t matter how evenly matched many thought the two teams were, if Mitchell Starc bowls in the rest of the matches like he did in the first ODI against the West Indies, it will be a most one-sided series. The 23-year old left-arm pacer totally dismantled the West Indies’ top order with as stunning a demonstration of swing bowling that one is likely to see.Nobody could play him with any degree of certainty.

Batsmen plying their trade at the Western Australia Cricket Ground in Perth are mostly concerned about the pace and the steep bounce that the track offers.Mitchell Starc, however, employed a full length, high pace, and deadly swing to wreak his destruction. The curve he achieved was both lovely and lethal and it is difficult to imagine that any current player would have been comfortable facing him. He ended with 5/20 off 6.5 overs and could easily have had a few more. The West Indies could make only 70, runs that the hosts made short work of, with Glenn Maxwell bludgeoning 51 off just 35 balls. 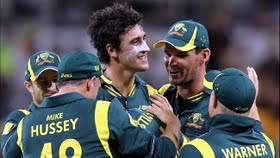 Perhaps it could be argued that captain Darren Sammy threw his side to the wolves by choosing to bat first on a surface that has often been problematic for visiting batsmen. But the day was bright and cloudless and there appeared to be no devil in the pitch. Besides, it is always easy to be smart in hindsight, and the relative ease with which Australia chased down the small total showed that it was the quality of the bowling, not the conditions, that was the determining factor.

If you wanted to quibble just a bit you could say that Starc started off bowling just a smidgen short, allowing the batsmen to hang back and watch most deliveries go by. It took him about two overs to find his perfect range, and Kieran Powell was allowed two handsome drives through the cover region off balls just slightly too full.

But immediately after the second boundary an impeccably pitched outswinger attracted and then kissed the edge of the left-handers bat on its way into the grasp of Michael Clarke at slip.This was the beginning of a devastating period for the West Indies, and a golden one for Starc as he sent back four batsmen for just one run.

Injury, poor form, and conflict with the authorities have conspired to prevent the classy Ramnaresh Sarwan from donning West Indies’ colours since July 2011, and were it not for the injury to Marlon Samuels it is doubtful he would have made the trip. Had he known, however, what Starc had in store for him he might have wanted his return delayed by at least one game. The third delivery he received, second from Starc, swung into him viciously, found the gap between bat and pad, and rearranged his middle and leg stumps. It was the kind of delivery that he, and every other batsman for that matter, would desperately hope to avoid, especially when so green to the crease.

Next it was Dwayne Bravo’s turn. He required just two deliveries, and initially there was some confusion as to whether he was out LBW or caught bat-pad. Bat-pad was the final verdict as the rapid inswinger took inside edge, onto pad, and then into the hands of Phillip Hughes, recently installed at short leg.

Kieron Pollard could well have been out first ball. But umpire Paul Reiffel turned down the LBW request, a decision that was upheld upon review when Hawkeye showed the ball hitting only the outer half of leg stump. An inch in the right direction (wrong direction if you’re the batsman) and it would have been overturned. In the end it really didn’t matter: the disassembled stumps courtesy of Starc’s next delivery, another inswinger, provided undisputed evidence of his dismissal -- no DRS required this time.

At the end of his spell, Starc had taken four wickets for 18 runs off six overs, and the West Indies were 36/6. He returned later to complete his five-wicket haul by bowling West Indies debutant Jason Holder. Clint McKay, who caused a flutter in West Indian hearts when he claimed the wicket of Chris Gayle early in the proceedings, and fast bowling debutant, James Faulkner, completed the rout.

The West Indies will undoubtedly want forget about this game pretty quickly and move on. The problem with that is that the next game, scheduled for Sunday will also be held at Perth. And If Mitchell Starc turns up in the mood he did for the first game, that one also will be over in a hurry.