Hosts England and 2015 runners-up New Zealand will look to seal their semi-final spot when they face off in match number 41 of World Cup 2019 at The Riverside Durham on Wednesday. While England recovered from back-to-back losses with an impressive show against India, New Zealand has now lost two in two, after remaining unbeaten in their first two games.

Aided by the fact that they won the toss and decided to bat first, England put up a brilliant display to end India's winning streak. Under pressure, Jonny Bairstow responded in the best way possible, with a hundred. The comeback of Jason Roy also made a difference at the top of the order while Ben Stokes continued his brilliant run with the bat. Yet another blazing half-century from him ensured England posted a total beyond India's reach.

England also outsmarted India with the ball. The move to bring in Liam Plunkett instead of Moeen Ali, who has an excellent record against India, proved to be a masterstroke. On a pitch that was getting difficult to bat on, Plunkett got the big scalps to unsettle India. Chris Woakes was sensational at the start, and his three maidens hurt India massively in the end. Although Mark Wood went for runs and India's negative approach also worked in their favor, England still will take a lot of confidence into the clash against New Zealand. 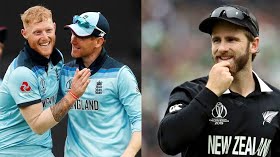 The Kiwis have lost their way a bit following defeats to Pakistan and then New Zealand. Their frailties in the batting were exposed in both the matches. Colin Munro and Martin Guptill have both been woefully below par after an impressive start to the World Cup. Henry Nicholls, who came in for the last game, also couldn't grab his opportunity. Whoever among the three play at Durham will need to lift their game significantly.

New Zealand has been over-dependent on their skipper Kane Williamson for runs, and he has delivered more often than not. However, he would be disappointed with the way he got out against Australia as would Ross Taylor, the other senior statesman, who played a horrendous shot under pressure. Trent Boult's hat-trick was a big plus as he continues to shine on the big stage. Overall, as well, the Kiwis should be pleased with the way their bowling is shaping up even though allowing Australia to recover from 92 for 5 raises some questions about their overall effectiveness as a bowling outfit.