“I will just have to wait and see but the chances are very, very slim,” Rahul was quoted as saying by the Times of India.

“I had torn my labrum (a ring of fibrocartilage). I couldn’t get into a few positions because my shoulder kept dislocating – popped out and popped back in. “That’s why I couldn’t play a lot of shots, had to restrict myself. I played with a lot of medication and taping. Surgery was to fix it on the inside,” he added in the report.

Rahul had injured his shoulder during the 4-match series against Australia. He underwent a surgery for the same. 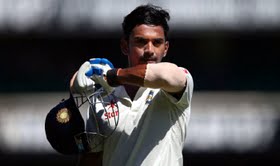 “They said it will take anywhere close to two to three months. But again, it depends, each body is different, you don’t k

nd how I well I take care of myself in the rehab phase. For now, it is just two-three weeks of relaxing and not doing anything and after that maybe I will start physiotherapy and my rehab phase will start from there,” he added.

Rahul admitted that he was disappointed over getting injured frequently. “It is frustrating for a young man who is new to international cricket – it’s been two-and-a-half years now,” he said. “I’ve already been injured twice or thrice. It makes me think about what I am doing wrong.

“I can’t see any reason why I keep getting injured because I am disciplined with my fitness and my diet and I look after my body. Now is the time to see what I can change in training.”