When BCCI sent out the ad inviting applications for the post of Team India coach, they wouldn't have expected the aftermath to be a clash between two big, and respected names of Indian cricket

When BCCI sent out the ad inviting applications for the post of Team India coach, they wouldn't have expected the aftermath to be a clash between two big, and respected names of Indian cricket. But, unfortunately in what is not good news for Indian cricket, Ravi Shastri, who was among the applicants for the post of India coach, and Sourav Ganguly, who was part of the cricket committee put together to interview the candidates, have been indulging in an ugly public spat. After Ravi Shastri lambasted Ganguly for being absent during his presentation, the former Indian captain chided Shastri for holidaying during a crucial time.

"The BCCI announced that they would be interviewing candidates for the Indian coach days in advance. He should have been here in person instead of holidaying in a beach in Bangkok while one of Indian cricket's greatest players made an hour long presentation in front of players who had lesser abilities than him," Ganguly added, taking a further dig at Shastri, who was Team India's Director for 18 months.

On Shastri's TV interview to India Today, Ganguly responded saying, "I have seen that and I was reading about it in the newspapers. Thought I would not react to it but it just went on and on. I will make available the emails and contacts I made with the BCCI."

Shastri's View: Earlier, Shastri was vocal in his criticism of Ganguly. He hit out at Ganguly for 'insulting' him by not being present for his presentation. "Not miffed at all. I am just disappointed. Nothing surprises me in cricket. It’s nothing to do with Sourav, but I am disappointed because that person was disrespectful of the candidate who was going to be interviewed and disrespectful of the job he was entrusted with,” Shastri was quoted as saying in the press.

He also had some advice for Ganguly. “Next time be in the meeting when someone is being interviewed for such a top post," he said.

Meanwhile, another former Mumbai great, Sanjay Manjrekar, backed Ganguly. "More than Sourav, I think Ravi is miffed with the rejection. It's a new experience for him. BCCI have made the better choice as coach," he opined. 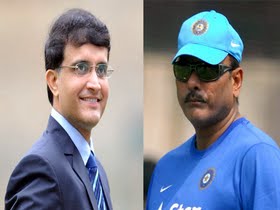 Another former India captain, the outspoken Bishen Singh Bedi, however, backed Shastri. He tweeted, "Not getting coach's job apart RJSHASTRI has every reason 2b peeved with selection process whence 1 selector played truant..not above board!!"