South Africa crushed England by 80 runs in the second ODI at The Rose Bowl in Southampton to draw first blood in the 5-match NatWest Series. The massive South African win was scripted by the 29-year-old Hashim Amla, who recorded a career best score of 150

South Africa crushed England by 80 runs in the second ODI at The Rose Bowl in Southampton to draw first blood in the 5-match NatWest Series. The massive South African win was scripted by the 29-year-old Hashim Amla, who recorded a career best score of 150. England were pathetic when it came to chasing a huge target under the lights.

Batting first after winning the toss, the Proteas piled up 287 for 5 with opener Hashim Amla leading the way with his 150 in just 124 balls striking 16 fours. Amla in the course of his innings became the fastest to reach 3000 runs in ODI Cricket beating the previous record held by none other than Master Blaster Viv Richards! This is now Amla’s 10th ODI century 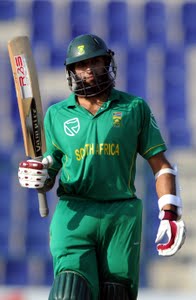 already having played only 59 games till date! Amla got able support from Skipper Graeme Smith, who made 52 (from 76 balls) with 5 fours in an opening stand of 89 in 19.2 overs. The bearded Hashim Amla batted almost the entire 50 overs and got dismissed only in the final over.

England needing 288 from 50 overs were never quite there in the contest having lost their Skipper Alastair Cook for a duck in the second ball of the innings itself to Lonwabo Tsotsobe. Another opener for England – Ian Bell looked good until he was dismissed for a 41-ball 45 (with 5 fours) by Robin Peterson in the 16th over.

The hosts kept on losing wickets at regular intervals before getting bowled out eventually for 207 in 40.4 overs. All-rounder Samit Patel played his part in reducing the margin of defeat with an attractive 45 from 51 balls with 3 fours and 2 sixes. For the Proteas, Morne Morkel, Wayne Parnell and Robin Peterson claimed two wickets each. The third ODI of the Series is on the 31st at The Oval.