Even as the dust over the Ben Stokes incident at Lord's is yet to settle, Australia and England prepare to face each other for the third time in the one-day series at Manchester. The two sides may not admit it, but it is humanly impossible for the incident not to be at the back

Even as the dust over the Ben Stokes incident at Lord's is yet to settle, Australia and England prepare to face each other for the third time in the one-day series at Manchester. The two sides may not admit it, but it is humanly impossible for the incident not to be at the back of their minds as they head into the mid-series clash. Players from both sides will have to make a conscious effort to try and ensure that they are not distracted by what transpired at Lord's. After all, there is a series at stake here. A victory will given Australia an unassailable 3-0 lead. England, on the other hand, have no option but to win to stay alive.

As the scoreline suggests, Australia have been the more impressive of the two sides. They had their troubles in the first ODI, but at Lord's, they were completely in control. In both matches, Australia managed to cross 300, and then keep the opponents down. Mitchell Marsh has been the star of the show for Australia with the bat so far, a development the Aussies will be pleased with after having encountered some frustrating times. Marsh was absolutely unstoppable at the death at Lord's, and reduced the English fielders to mere spectators. In the first match as well, he provided excellent support to Matthew Wade. 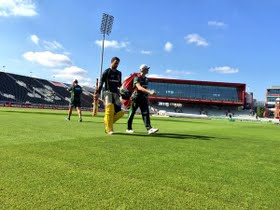 Speaking of Wade, the Aussies will also be pleased with his form, as he did in the first ODI what Marsh did in the second. Like the latter, Wade too is back after some disappointing times. In fact, almost the entire batting line-up impressed at Lord's. Steven Smith led from the front with a smooth knock, George Bailey chipped in with a crucial fifty while Glenn Maxwell also got a start. Of course, the Aussies would be extra pleased if Maxwell converts the same. Australia's bowling also looks in great shape. For now, injury is their biggest handicap. David Warner and Shane Watson have been ruled out as has been medium pacer Nathan Coulter-Nile.

As mentioned earlier, England will need to rise above the Stokes incident. They may feel hard done by, but if that's the case, they must go even harder against the Aussies at Manchester. Unlike Australia, England's batting has lacked the depth to last 50 overs. Eoin Morgan was brilliant at Lord's, and he got runs in the first ODI as well. But, he will seek more from the rest of the players in the form of runs and support. Jason Ray has looked good in both games so far, without carrying on to register a big score. Same is the case with James Taylor, who has been out in the 40s in both games. Alex Hales has been downright disappointing, but England would be hoping for fireworks from Jonny Bairstow, who is replacing Jos Buttler.

England's bowling also needs to rediscover its edge. Steven Finn has been reasonable in both matches without being dangerous. In fact, it was only Adil Rashid who impresses with the ball in the opening game. At Lord's, both he and Moeen Ali went for plenty as the Aussies opened up. There is every possibility that David Willey will be brought in at Manchester in an attempt to strengthen the bowling. But, the most curiosity will be over the performance of Stokes. All eyes will be on him both when he comes on to bat and ball. Stokes has made his stand clear over his controversial dismissal, and the fiery character that he is, may have a point or two to prove to the Aussies.