One of the most-awaited clashes of the World Cup, Australia vs New Zealand, will take place at Lord's on Saturday. The two sides last met in a World Cup match in the 2015 final at Melbourne, where the Aussies easily thumped New Zealand. Traditionally too Australia have had the upper hand over the Kiwis, so Kane Williamson will be keen to change history.

Both Australia and New Zealand go into the match with only one loss against the name. But, the big difference is that while Australia's loss against India came so long back that it hardly matters, the Kiwis faced their first defeat in their most recent game against the mercurial Pakistan. One more reason for Australia to believe they have an advantage over New Zealand. 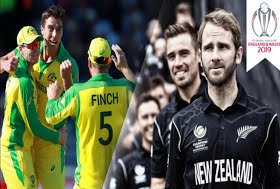 The Aussies have been supreme because their big names have stood up and delivered. David Warner and skipper Aaron Finch have been the most prolific opening combination in the tournament by some distance. Against England as well they put up an impressive stand with Finch going on to register another hundred. Steve Smith too has been good. However, the middle-order collapse against England as well as Pakistan before that would be a cause of worry. Glenn Maxwell's inconsistent run could trouble them. Click here for more cricket tips.

Australia's pace bowlers have also proved to be excellent in the World Cup so far. Like in the last edition, Mitchell Starc has once again risen to the challenge. He has by far been the most successful bowler in the tournament, with 19 wickets. Pat Cummins has provided him able support right through while Jason Behrendorff joined the party with a five-wicket haul against England.

New Zealand will have it really tough against Australia although they have been one of the teams of the tournament so far. Pakistan proved in the last match that their batting can be put under pressure if Kane Williamson is taken out. The skipper's exit saw New Zealand fumble in the last game. The struggling openers Martin Guptill and Colin Munro need to stand up against the tough Aussie challenge and runs will also be expected of Ross Taylor.

All-round ability has been one of the key strengths of the current Kiwi squad. It was on display against Pakistan as well with Jimmy Neesham and the highly impressive Colin de Grandhomme rallying to pull the team out of embarrassment. Apart from improving on the batting, a lot will also depend on how Trent Boult, Lockie Ferguson and co handle the challenge of bowling to Warner and Finch. It could be one of the decisive factors.