Yuvraj Singh who announced his retirement from international cricket earlier this year has revealed that he was hurt by the treatment meted out to him as he looked to make a comeback into the Indian team. He added that he was equally disappointed with the fact that seniors like Zaheer Khan and Virender Sehwag did not get due respect in the manner they were sacked.

Speaking exclusively to India Today, Yuvraj revealed that after the Champions Trophy, he got injured and was told to prepare for the Sri Lanka series. However, he was then told to clear the Yo-Yo test, and despite doing so was then asked to prove himself in domestic cricket. 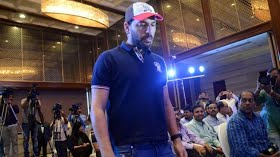 Yuvraj claimed that he was not wanted back by the team management and so wasn't picked despite clearing the yo-yo test. "They actually thought that I wouldn't be able to clear the test due to my age. And that it would be easy to decline me afterward. Yeah, you can say it was an exercise in making excuses," Yuvraj went on to say.

The 37-year-old, who overcame cancer and made a successful return to the Indian team, also stated that he was puzzled at being dropped after the Champions Trophy 2017, despite producing a couple of match-winning performances. Yuvraj kick-started that tournament with a rollicking fifty against Pakistan but struggled thereafter.

"Never thought that I would be dropped after being the man of the match in 2 games out of the 8-9 I played after the Champions Trophy 2017," Yuvraj went on to add.

The former all-rounder, instrumental in India’s 2007 and 2011 World Cup wins, also spoke out for Sehwag and Zaheer stating they deserved a better exit considering their services to Indian cricket.

"I think it was unfortunate for a guy who has played 15-17 years of international cricket to not being made to sit down and being talked to. No one told me and no one told Virender Sehwag or Zaheer Khan either," Yuvraj lamented.

"Whichever player it is, the person who is in-charge should sit down and talk with the player that we are looking at the youngsters and we've taken this step. This way, you do feel bad at the beginning but at least you give them the credit of being true to your face, which doesn't happen in Indian cricket. It has been like that forever almost," Yuvraj claimed in the India Today interview.