Will rewind and play Steve Smith run-out as this is my best effort: Ravindra Jadeja

Ravindra Jadeja came up with a brilliant bowling and fielding effort to seize the advantage for India on Day 2 of the SCG Test against Australia. Resuming the day at 166 for 2, Steve Smith and Marnus Labuschagne took Australia past 200 before the left-arm spinner struck by having the latter caught for 91. With an opening available, Jadeja went on to dismiss Matthew Wade, Pat Cummins and Nathan Lyon to finish with figures of 4 for 62. After Steve Smith reached 131 and was looking good for much more, Jadeja ran him out with a brilliant direct hit, coming rushing in from deep square leg. Australia all-out for 338.

India replied with 96 for 2 in 45 overs. Openers Rohit Sharma and Shubman Gill added 70 for the first wicket before the former was dismissed, giving a caught and bowled offering to Josh Hazlewood for 26. Gill proceeded to bring up his maiden Test fifty in only his second Test. However, he fell, immediately after reaching the landmark, going with hard hands at one from Pat Cummins outside off stump, and presenting a catch to gully.

Speaking after the day’s play, Jadeja described the run-out as his best effort, and added that he would love the watch the clip of the run-out again and again. 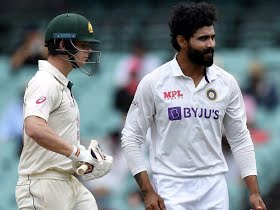 “I will rewind and play this run-out as this is my best effort. A direct hit from outside the 30-yard circle and that’s like a moment that gives you that satisfaction,” Jadeja admitted at the virtual media conference.

“Three or four wicket hauls are fine but this run-out will stay with me,” he further added.

Praising Gill for his half-century, Jadeja said, “I think, he is technically very sound. He has the temperament to play long innings. It’s good that he got a start today, the 70-run opening partnership with Rohit. It’s a good sign for India and hope he comes good in the second innings as well.”

Asked about the SCG wicket, the ever-improving all-rounder added: “Wicket was very slow and I wasn’t getting any turn from the wicket. So it was important to pitch the ball at one place every time.

“I wanted to bowl in good areas as our fast bowlers were doing the same. My plan was to not leak runs and create pressure on the batsman and for Smith, my approach was to not give him some easy runs.”