After a rather long wait, India's 2019 World Cup campaign will finally get underway when they face South Africa at The Rose Bowl in Southampton on Wednesday.

In the latest development, which will not please South Africans, their speedster Dale Steyn has been ruled out of the entire tournament with a shoulder injury. It is a double blow for the Proteas as Lungi Ngidi will also miss the match due to a hamstring strain he picked up in the defeat to Bangladesh on Sunday. 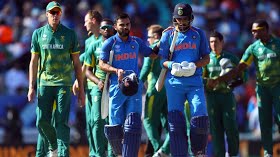 India will be disappointed if they don't put it across an under strength South Africa side. They have everything going for them at present, with the fitness of Kedar Jadhav being the only cause of concern. Even if he is fit though, there is likely to be a toss-up between him and Kedar Jadhav for the second all-rounder's slot, with Hardik Pandya almost confirmed to occupy one.

Speaking of the team combination, while they would be tempted to play both Kuldeep Yadav and Yuzvendra Chahal, considering South Africa's weakness against spin, the conditions could also determine the final eleven. Bhuvneshwar Kumar could come in very handy if the ball is moving around, meaning one of the two tweakers could be left out.

India’s batting would be a cause of concern for sure despite Lokesh Rahul and MS Dhoni's hundreds in the warm-up against Bangladesh. Their top three, of whom so much is expected, faltered in both the practice games and would be desperate to do well on the big stage. Virat Kohli in particular would be raring to go, with South Africa already having begun their mind games.

Kagiso Rabada, it was, who said that Kohli is immature and can't take abuse. With the tone set, it would now be intriguing to watch the battle between the two. Above all though South Africa need to settle into the groove after a really bad start. Rabada will be leading the attack in the absence of Steyn and Ngidi and there would be additional responsibility on him and Imran Tahir.

South Africa's batsmen will also need to lift themselves after two poor efforts with the bat. The return of Hashim Amla from injury would be welcome but bigger scores would be expected from Aiden Markram. Faf du Plessis, the South African skipper, will also look to inspire the team with the bat, there could be no better example.

How their batsmen perform against the number one ODI bowler, Kagiso Rabada, could be a defining factor as well.