Steve Harmison: A tale of an unfulfilled career and honest admissions

Not long ago, Matthew Hoggard had announced his retirement from cricket. Now his partner from that famous 2005 Ashes triumph, Steve Harmison, has also called it quits.

Not long ago, Matthew Hoggard had announced his retirement from cricket. Now his partner from that famous 2005 Ashes triumph, Steve Harmison, has also called it quits. There was a striking similarly about their exit, both made an announcement quite a few years after they had played their last international game. At their peak, English fans and selectors expected Hoggard and Harmison to lead the pace bowling attack for the decade to came. But it wasn’t to be the case, and both faded away, and retired after plying their trade in country for a few years. 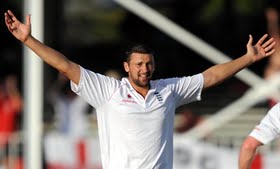 There is no doubt that, considering his talent, Harmison should have achieved a lot more than 226 wickets from 63 Tests and 76 scalps from 58 ODIs. On his day, he was the best in the world; this claim can be substantiated by the fact that for a brief period of time he was the official numero uno bowler as per the Test bowling rankings. In the 2005 Ashes triumph, his contribution was most crucial. His 17 wickets from the five games were testimony to his success in the series. Harmison’s delivery that got rid of Michael Kasporwicz in the legendary Edgbaston Test of that series would remain amongst the finest winning moments in cricket.

Harmison’s contribution to the 2005 Ashes series triumph however went beyond just the wickets he had in the last column. He psychologically impacted the Aussies running in hard and giving them physical wounds. English fans would fondly remember that for once Aussies got a dose of their own medicine as Harmison struck Justin Langer on the elbow and Ricky Ponting on the helmet. The blows were symbolic of the fact that England had risen from the slumber after a decade and a half. Deservedly, England went on to win the Ashes that year.

In a rather ironic development, Harmison’s own mental weaknesses couldn’t be masked by the aggression that he showed on the field. Just a few years into international cricket, and Harmison revealed that he was suffering from homesickness. The fast bowler’s aversion to travelling came to the fore when he sent down the first ball of the 2006-07 Ashes series at Brisbane down to Andrew Flintoff at second slip. Analysts believe that the delivery set the tone of the series and they might have been right, as England were thrashed 5-0 in the Ashes.

To his credit, Harmison did not hide his frailties. He was candid enough to admit that he did not enjoy playing away from home. Once this revelation came to the fore, it was difficult for Harmison to bring out his A game every match. And, he expectedly faltered. Even the decision to quit one-day internationals rather early did not mark a change in Harmison’s fortunes. There were brief sparks, but he was never quite the bowler who bullied the Aussie greats in 2005. Frequent injuries did not help his cause, and much like Marcus Trescothick, who suffers from similar depression, Harmison retreated to the easier life of county cricket. He made not have fulfilled his potential, but Harmison would still be remembered as one of those players who was instrumental in turning around England’s fortunes rather drastically.