India are in the driver’s seat of the Ahmedabad Test by the end of the second day’s play with England losing three quick wickets in their first innings already.

India are in the driver’s seat of the Ahmedabad Test by the end of the second day’s play with England losing three quick wickets in their first innings already. This was after the hosts had declared their first innings at 521 for 8 following Cheteshwar Pujara’s maiden double Test century.

The final session saw India batting for about 40 minutes and not getting many runs. Pujara got to his milestone and remained unbeaten on 206 (from 389 balls with 21 fours) when the declaration was made with India batting out for 160 overs. R Ashwin (23, under edging a cut off Pietersen to the keeper) and Zaheer Khan (7, slicing a square drive off a full ball from Anderson to gully) were the two Indian players who got out in the final session. 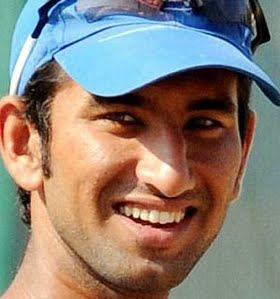 England had 18 overs to see through before stumps and the opening pair of debutant Nick Compton and Alastair Cook defended decently against the spin duo of Ashwin and Ojha. India’s first breakthrough came in the 14th over when the over defensive Nick Compton (9 from 53 balls) was bowled through the gate by a turning off break from Ashwin after lunging forward in defence outside off. In the very next over, Pragyan Ojha sent back nightwatchman James Anderson (2 from 6 balls) caught bat pad by the diving Gambhir at shortleg in a forward defence.

The visitors lost another wicket before the close with Jonathan Trott dabbing at a turning ball in a forward defence off R Ashwin to get a tame bat pad inside edge to shortleg. England finished the day at a disappointing 41 for 3 in 18 overs. Skipper Alastair Cook has looked solid though with an unbeaten 22 (from 39 balls with 4 fours). Giving him company is Kevin Pietersen (6* from 6 balls) who has shown his intentions of counter attacking the Indian bowling.

Tea Report: India have slowly and steadily approaching towards a declaration in their first innings as they went to Tea in a commanding position at 502 for 6 in 152 overs. England’s wonderful over-rate in the two sessions has now left just the 28 overs to be bowled in the final session. India collected 92 runs in 31 overs at the loss of two wickets in the afternoon session.

Cheteshwar Pujara is inching towards a maiden double century in Test Cricket. He is batting on a career best of 196* (from 367 balls with 21 fours). Pujara lost two partners in Yuvraj Singh and MS Dhoni in the afternoon session. Yuvraj who was looking good for a century missed out on the opportunity when he heaved a full toss from Samit Patel into the hands of long on to perish at a personal score of 74 (from 151 balls with 6 fours and 2 sixes). Yuvraj’s stand for the 5th wicket was worth 130 runs.

The Indian Skipper MS Dhoni joined Pujara but couldn’t force the pace on the slow track. He became the fifth scalp of Graeme Swann after a scratchy 5 from 37 balls which came to an end through a paddle sweep dragged onto the stumps. Pujara continued to pile up the frustration on the Englishmen with an unbeaten partnership with R Ashwin (21* from 45 balls with 2 fours) to take India past the 500-run mark.

Lunch Report: India is in a strong position at 410 for 4 in 121 overs by Lunch on Day 1. The overnight pair of Cheteshwar Pujara and Yuvraj Singh is still intact and have collected 87 runs this morning. Pujara has registered his 2nd Test century while Yuvraj Singh with his positive strokeplay is 28 runs short of his 4th Test century.

Pujara is on 133* from 274 balls with 16 fours while Yuvraj is on 72* (from 140 balls with 6 fours and 2 sixes). The pair have stretched their unbroken 5th wicket stand to 127 runs. The morning session saw a couple of close lbw shouts against Yuvraj but the southpaw managed to escape from them to keep India on top with the patient Pujara.

All the English team could do was do exceedingly well with their over rate as they bowled as many as 31 overs in the morning session. The scoring rate for India has slowed down but the important thing is that they are heading towards a massive first innings total.

Build Up to Day 2: England are under pressure to bowl out India in a hurry on the second day as the hosts are sitting pretty at 323 for 4 on a pitch that is only going to make batting tougher. All eyes will be on Cheteshwar Pujara who is just two runs away from his 2nd Test century while Yuvraj Singh has looked determined to come up with a good score. With the second new ball just four overs old, it should come onto the bat nicely to score some quick runs. India has decent batting left in the tank to score atleast 400. Sometime later in the day, we will get to see how the English batsmen would do on this slow turning pitch.