The Lucknow Super Giants (LSG) will take on the Chennai Super Kings (CSK) in match No.7 of the Indian Premier League (IPL) 2022 at the Brabourne Stadium in Mumbai. The game will be an evening match and will begin at 7:30 PM IST. Both LSG and CSK will come in having lost their respective opening matches in the tournament. KL Rahul-led LSG went down to fellow debutants, the Gujarat Titans (GT), at the Wankhede Stadium in Mumbai in their previous encounter. On the other hand, CSK tasted a six-wicket defeat at the hands of the Kolkata Knight Riders (KKR). Both teams will thus be keen to get off the mark on Thursday.

LSG had a torrid start to their IPL 2022 campaign, losing skipper Rahul first ball to Mohammed Shami. Quinton de Kock, Evin Lewis and Manish Pandey also struggled as LSG found themselves in massive trouble at 29 for 4. Deepak Hooda and Ayush Badoni came up with excellent counter-attacking half-centuries to lift the team past 150, which looked a competitive total at the halfway stage.

Lucknow’s bowlers, however, could not defend the total as Gujarat clinched victory in the last over. Rahul’s captaincy in the match was rather bizarre. Dushmantha Chameera, who had claimed two wickets and was the best bowler for the team, did not complete his quota. The skipper used spinners Deepak Hooda and Ravi Bishnoi at the end and paid the price for the same. Despite the loss, do not expect any significant changes in the playing XI. 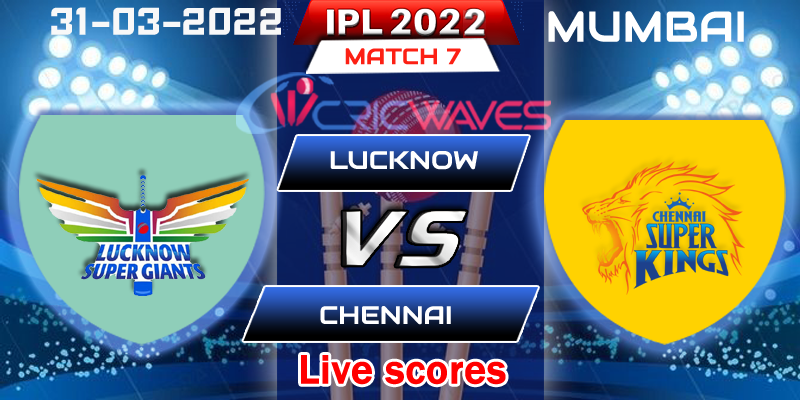 Like Lucknow, Chennai also suffered because they got off to a bad start with the bat. Ruturaj Gaikwad perished cheaply as did Devon Conway and Robin Uthappa. The good news for the franchise is that Moeen Ali is likely to be available for the game and he will strengthen both the batting and bowling.

Similar to LSG, CSK’s new skipper Ravindra Jadeja will also be under some pressure. He looked out of sorts with the willow and did not have much of an impact with the ball as well against KKR. Considering that he has taken over from MS Dhoni, there will be huge expectations from the all-rounder to deliver the goods.