India eased to a 9-wicket win in the Ahmedabad Test taking less than an hour after Lunch to wrap up their run chase of 77! The hosts took only 15.3 overs to get to the target..

India eased to a 9-wicket win in the Ahmedabad Test taking less than an hour after Lunch to wrap up their run chase of 77! The hosts took only 15.3 overs to get to the target with the only casualty coming in the form of Virender Sehwag (25 from 21 balls) who was caught trying to launch Swann for a six.

Having struck a maiden double century, Cheteshwar Pujara was on cloud nine as he raced away to an unbeaten 41 from just 51 balls (with 8 fours). Virat Kohli remained unbeaten in his company on 14* (from 21 balls). Pujara got the Man of the Match award ahead of the other big performers such as Pragyan Ojha and Alastair Cook. 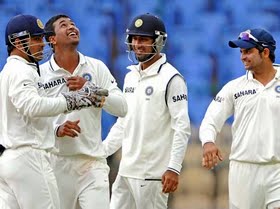 Lunch Report: England’s resistance in their second innings finally came to an end leaving India with a target of just 77 runs with two full sessions to play. The visitors battled out for 154.3 overs and were bowled out for 406 just at the stroke of Lunch on the final day.

India’s much awaited breakthrough came about 37 minutes after play had started with Matt Prior patting a tame return catch to Pragyan Ojha to a rank short ball which stopped onto the bat. Prior (91 from 225 balls with 11 fours) was unlucky to miss out on a well deserved century. His partnership with Skipper Cook was worth 157 runs and most importantly lasted a little more than 60 overs!

Four overs after Prior’s exit, Ojha got the big wicket of Alastair Cook, who seemed tired after his marathon knock and was unsure whether to play a flighted delivery angled across outside off in the rough on the frontfoot or the backfoot. In the process, Cook was bowled with the ball turning in just enough and staying low to strike his off stump. Cook missed out on a double century and left the park with 176 to his name having played out 374 balls and hitting 21 fours in that epic knock. England at the time of his dismissal were just 35 runs ahead.

England lost their 8th wicket in the form of Stuart Broad (3) who was early in closing the face of the blade to a short ball from Umesh Yadav to end up getting caught and bowled off a leading edge. India had to work hard for its next wicket with Graeme Swann scoring 17 from 31 balls with 2 fours and a six before he was cleaned up in an attempted switch hit off R Ashwin. Four balls after Swann’s exit, Tim Bresnan (20 from 48 balls) was caught by the diving Ajinkya Rahane at covers in a cracking cover drive off Zaheer Khan.

Build Up to Day 5: Having been on the field for more than 200 overs, the Indian bowlers and fielders are completely tired. A night’s rest might have recharged their batteries but mentally the likes of Ashwin and Ojha must be really jaded. The credit for that goes to Alastair Cook who has batted out as many as 341 balls in the second innings and hasn’t looked like giving away his wicket anytime. Cook has got Matt Prior, who has battled hard so far facing 190 balls. England with a lead of 10 runs will aim to bat for two more session to entertain the thoughts of drawing this Ahmedabad Test.

So a tough task ahead of India to remove the last five wickets of England. The point to note is that England has good batting right till no.10 with only James Anderson not having the talent with the bat.