Sad but not devastated: Kohli, as India exit World Cup 2019

India went down to New Zealand by 18 runs in the 2019 World Cup semi-finals at Manchester. Although India was always considered to be the stronger of the two sides

India went down to New Zealand by 18 runs in the 2019 World Cup semi-finals at Manchester. Although India was always considered to be the stronger of the two sides, New Zealand's methodical approach and the tactical brilliance of their skipper Kane Williamson made a huge difference in the end.

The loss meant India were out of the World Cup although the semi-final defeat against New Zealand was only their second in the tournament. Chasing 240, India managed only 221, despite the fifties from Ravindra Jadeja and MS Dhoni helping them recover from a precarious 92 for 6.

After the loss, India skipper Virat Kohli tweeted, thanking fans, and said "we gave everything we had" and "share the same emotions as you". At the post-match conference, Kohli admitted that the team is disappointed but they are not devastated. 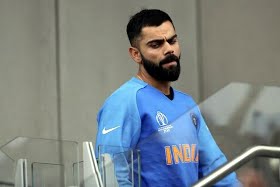 "You feel bad for the result. Everyone goes out to win the match and when it doesn't happen, you feel sad. We're sad but not devastated," Kohli said at the post-match press conference.

He felt that while New Zealand bowlers were brilliant especially at the start, the shot selection from some of their batsmen could definitely have been better.

"Rohit got a good ball and my ball was also decent. A couple of shot selections could've been different. We were confident despite the start we got. But the credit goes to New Zealand's bowlers who kept on hitting the right line and length," Virat added.

Kohli also defended Rishabh Pant, who threw his wicket away after getting yet another start. "He is an instinctive player and he did well to form that partnership with Hardik. I made many errors earlier in my career and he is young. He will reflect on it and we've seen glimpses of his talent," the Indian captain explained.

New Zealand will now take on the winner of the second semi-final between Australia and England being played today in Birmingham in the final at Lord's on July 14.