The test of Gautam Gambhir: Now it is more than just runs

If reports are to be believed, M S Dhoni, unhappy with the attitude of his opener Gautam Gambhir, has complained to the BCCI over the same. As such, the opener will be under greater pressure when he comes into bat at Nagpur.

If reports are to be believed, M S Dhoni, unhappy with the attitude of his opener Gautam Gambhir, has complained to the BCCI over the same. As such, the opener will be under greater pressure when he comes into bat at Nagpur. It has been almost three years now since the left-hander has scored a Test century. And yet, he is not willing to admit that he has major issues with his game. To think that he replaced Wasim Jaffer, who possessed a much better record in comparison to Gambhir of the last three years, now seems unfair on the soft-spoken Mumbai batsman.

To be honest, at the time when Gambhir took over from Jaffer as India’s opener, he was the better choice of the two. He was scoring runs at will, and a pace as consistent as anyone in international cricket. But, that phase did not last long enough and, for the last two seasons, he has retained his place in the team merely on reputation, something which has taken a severe beating following his incongruous comments coupled with the latest reports about his selfish attitude towards the game. 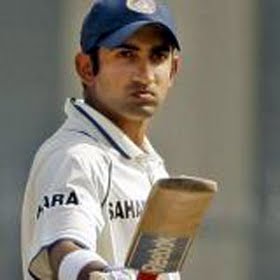 Considering the see-saw change in Gambhirover the last year or so, he has to prove more than the fact that he is still good enough to score big runs in international cricket. The left-handed opener has been getting starts in the series, but anything short of a hundred at Nagpur will be considered as a failure for Gambhir. He is an opener and his primary job is to score big tons. He shouldn’t be told about his role in the team considering he is now one of the senior members, but if he feels he is doing well enough scoring 40s and 60s, one only hopes that he has been spoken to by the right people.

As for his selfish attitude towards the game, it was evidently clear in the game at Mumbai. While the need of the hour for India was runs, Gambhir was intent on preserving his wicket and, in the process, place in the XI, even if that meant giving more strike to the tailend batsmen. A batsman with such a defensive approach is not what India needs in such a tough situation. Probably the Gambhir of 2009 would have thought differently, but it’s obvious now that Gambhir is not the same anymore, as batsman and as player as well.

When he steps out to bat at Nagpur, one feels the batsman at the non-striker’s end would be more worried of him rather than the English bowlers. Gambhir was evidently at fault in running out Virender Sehwag and Cheteshwar Pujara during the Kolkata Test, and with that he would have caused a temporary fracas within the side -- far from ideal situation for either the player or the team. The real test for Gambhir would be to win back the respect of teammates first. He can do that only by scoring a hundred at Nagpur and ensuring he doesn’t play a role in any of his teammate not getting a fair shot at the same.