With rain playing complete havoc in the India-New Zealand game as well, now four matches in the World Cup have been washed out due to rain. As such, the spirit has been dampened ahead of the England-West Indies clash in Southampton.

If one wants to look at the team's recent form as part of a preview, England go in having registered a whopping 106-run victory over Bangladesh. They will definitely be favourites as they head into the clash against West Indies. 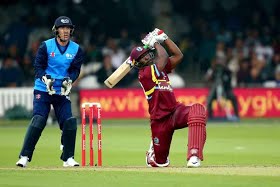 Having lost to Pakistan rather shockingly, England recovered with a brilliant effort against Bangladesh. Jason Roy, who was one of the villains in the field against Pakistan, came back to blast 153 and set up the win against Bangladesh. Jos Buttler too has been in scintillating form but England would hope the injury he picked up in the previous game doesn't affect him too much.

England's bowling has been doing rather well with Jofra Archer leading the pack with some very good pace bowling. Ben Stokes and Liam Plunkett too have utilised the conditions well. There is talk that Moeen Ali could return to the playing eleven considering West Indies have quite a few left-handers.

West Indies, like Pakistan, have been up and down. After undoing Pakistan, they failed to rise to the challenge against Australia. Still, they did enough to demonstrate that they can give England a tough fight. Chris Gayle will need to stand up and deliver against England after being unable to perform against Australia. Shai Hope and Shimron Hetmyer will also be expected to deliver.

Windies' bowling has been rather impressive in the tournament so far. Oshane Thomas has been highly competent and would look to carry on his great run. As leader, Jason Holder has stood out with both bat and ball. Sheldon Cottrell too got early wickets against South Africa before rain played spoilsport. Former Barbadian Archer's contest against Gayle and co will be one to look forward to.