Having won all their league matches, Sri Lanka undoubtedly were the favourites to clinch the Asia Cup title.

Having won all their league matches, Sri Lanka undoubtedly were the favourites to clinch the Asia Cup title. At the same time, on a given day, Pakistan can outclass the best. As mentioned in the preview, the final was a clash between Sri Lanka’s consistency and Pakistan’s ebullience. That is exactly how it turned out to be. On the big day though, it were the Lankans who maintained their consistency and got their act right in the summit clash as well. Sri Lanka had their troubled moments but found their heroes who rescued them from troubled waters. 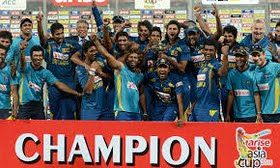 Although there were quite a few impressive performances by Sri Lankan players in the final, one man’s effort made a massive difference. Pakistan were batting first, and the Sri Lankan bowlers had to ensure that they keep the Pakistanis down to as low a total as possible, since they would have been under extreme pressure chasing in the final. Like he did in the first match of the tournament against the same opponents, Lasith Malinga came up with a superb spell. His big strikes at the top put Pakistan on the back foot very early in the final. Even though they recovered well plenty of damage had already been done.

The fact that Malinga was the only wicket-taker for Sri Lanka in the final was proof of how brilliantly he bowled. It is very rare that a bowler picks up two five-wicket hauls in the same event. What makes Malinga’s effort even more commendable is the fact that his performance has come at a time when the game is heavily loaded in favour of the batsmen, with the power play and field restrictions in place. His success proves that a great bowled can succeed irrespective of the rules in place.

While Malinga’s performance was exceptional, Pakistan did manage to post a decent score on the board. This meant the Lankans had to bat well to lay their hands on the trophy. They got off to a confident start courtesy the partnership between Kushal Perera and Lahiru Thirimanne, but the match was back on an even keel after they lost a couple of wickets quickly. Kumar Sangakkara’s first-ball dismissal was a particularly big blow. He had been the team’s mainstay throughout out the tournament, and his early dismissal had shifted the momentum back in Pakistan’s favour.

The partnership which eventually decided the fate of the final was the one between Thirimanne and Mahela Jayawardene. Thirimanne had been in excellent form throughout the tournament, and made sure that he stood up on the day that mattered as well. In international cricket, success is all about grabbing your chances and Thirimanne certainly did that. Jayawardene, on the other hand, demonstrated how crucial experience is in crunch situations. He had been struggling for runs throughout the tournament, but in the final he played saviour with a high- quality knock that complemented Thirimanne perfectly. All in all, Lanka were deserved winners.