CSK Vs KXIP: Raina played a spectacular knock for Chennai

What is it about Suresh Raina in the IPL? He looks completely out of sorts in Tests, is often ungainly in ODIs though it must be mentioned that he is highly successful. But, when it comes to the IPL, the attacking southpaw is at his very best.

What is it about Suresh Raina in the IPL? He looks completely out of sorts in Tests, is often ungainly in ODIs though it must be mentioned that he is highly successful. But, when it comes to the IPL, the attacking southpaw is at his very best. Those who have seen Raina play in the glorified domestic T20 tournament over the years wouldn’t be surprised at the blistering knock he came up with against Kings XI Punjab on Thursday at Chepauk. If anything, they would have only wondered why it actually took so long -- six seasons to be precise. On a hot Thursday at Chennai though there was no stopping Raina as he single-handedly powered his side to victory seventh consecutive win.

It was an innings of the highest order from Raina, more so considering the sweltering conditions at Chennai. Unlike in some of the earlier games, the left-hander paced his innings to perfection against Punjab. He began steadily by placing the ball in the gaps, and once he got his eye in, he ensured that he capitalised on the bright start. The most incredible aspect of Raina’s knock was that he kept running hard between the wickets even though the conditions were no suitable for doing so. It may have only been a T20 game, but his performance under the situation was still a good enough indication of the stamina he possesses. Some of the big shots he hit were also incredible. 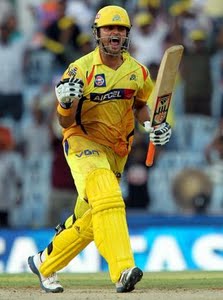 While Raina was undoubtedly the hero with the bat for Chennai, there were a couple of other performances that were also significant. Michael Hussey gave good company to Raina for the first half of the innings, giving the latter the freedom to go after the bowling without many worries. The cameo played by Albie Morkel was also crucial considering the fact that MS Dhoni was run out cheaply. The Chennai skipper usually gets the big hits for his side in the last overs, but Morkel ensured that the team did not miss Dhoni out in the middle.

Punjab’s bowling performance was easily one they would like to forget. Praveen Kumar was dispatched all over the park, David Hussey had another forgettable encounter with the ball while Piyush Chawla, Manpreet Gony and R. Sathish also had no answer to Raina’s onslaught. Under the circumstances only Parvinder Awana managed to make any sort of impression. However, his solo performance wasn’t enough to stop Chennai from running away with the game.

Mind you, Punjab themselves gave Chennai a scare when it was their turn to bat. Shaun Marsh and David Miller combined in an outstanding partnership, hitting the ball as cleanly and as powerfully as Raina earlier in the day. Some of the strokes they came up with were simply magnificent. Even so, the fact was that they were always playing catch up once Chennai got the early wickets. Dwayne Bravo bowled a wonderful spell at the death to kill Punjab’s faint hopes.

Turning point of the game: Wriddhiman Saha’s dismissal in the fourth over of Chennai’s innings, which brought Raina to the crease.