Stats of Day-Night Tests should be different from regular matches: Sunil Gavaskar

Former India opener Sunil Gavaskar is of the view that the statistics for day-night Test matches should be different from those of regular Test matches. Gavaskar made

Former India opener Sunil Gavaskar is of the view that the statistics for day-night Test matches should be different from those of regular Test matches. Gavaskar made the comments prior to India’s first-ever Day-Night Test match to be played between the hosts and Bangladesh at the Eden Gardens in Kolkata from November 22.

"The thing I feel is that the stats for pink-ball Test cricket should be separately maintained from red-ball cricket. Similarly, for limited-overs cricket also the stats should be separate for red-ball and white-ball, or some sort of distinction made so that future generations can know what was what," Gavaskar opined in an AFP report.

Gavaskar also felt that the future of Test cricket is bright, and should be similar to the success tasted by Day-Night ODIs. "When day-night cricket started not much thought it would be successful but look at the huge following it has now, so there's no reason to believe that day-night Test cricket won't be successful too,” the India legend added. 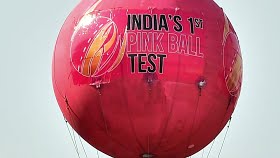 The cricketer-turned-commentator also added that India’s inexperience with the pink ball shouldn't hamper their chances too much at Eden Gardens. "This is a magnificent Indian team that can find a way to win even if they are playing on the snow in Iceland or sand in the Sahara desert. So it does not matter whether any of the players have played earlier with the pink ball or not," Gavaskar went on to state in the AFP report.

India is 1-0 up in the 2-match Test series having the first Test at Indore by a margin of an innings and 130 runs. They are favorites to clinch the series by winning the Day-Night Test at Eden Gardens as well. The historic Test is to see a full house on the first four days, as informed by BCCI President Sourav Ganguly.