New Zealand Test, ODI Squad for the tour of England in May 2015

New Zealand announced Test, ODI and T20 Squad for the tour of England in May 2015. Martin Guptill has been recalled to the New Zealand test squad.

Martin Guptill has been recalled to the New Zealand test squad for the two-match tour of England after the top-order batsman finished top scorer at the recent 50-over cricket World Cup.

Guptill, whose last test was also in England two years ago, scored 547 runs in nine matches at the event co-hosted by New Zealand and Australia, earning him a place in the squad announced by selectors on Saturday. 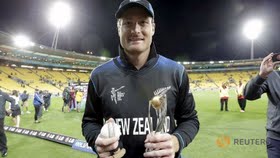 Brendon McCullum has been named captain of the 15-player squad but will miss the two warm-up matches ahead of the opening test at Lord's on May 21 due to domestic cricket commitments, with wicketkeeper BJ Watling taking charge of those contests.

Headingley will host the second test from May 29 before a five-match one-day series begins on June 9, ahead of the only Twenty20 game of the tour at Old Trafford on June 23.