Repeated the words that Imran Khan said to us: Ramiz Raja on his message to Babar Azam ahead oiccf the T20 World Cup final

Pakistan Cricket Board (PCB) chairman Ramiz Raja has stated that he has tried to motivate the Pakistan cricket team ahead of their T20 World Cup 2022 final against England at the Melbourne Cricket Ground (MCG) on Sunday, November 13. Raja revealed that he tried to give the same message to the team that Imran Khan gave when the country won the 1992 World Cup at the same venue 30 years ago.

Pakistan booked their place in the summit clash against England by thumping New Zealand by seven wickets at the Sydney Cricket Ground (SCG) in the first semi-final. The Englishmen, on the other hand, hammered Team India by 10 wickets in the second semi-final in Adelaide.

Speaking to reporters about the message he gave to the team, Raja said, “That was the shortest speech. Because what you are supposed to do has been done. Your technique cannot improve or decay in the next 24 hours. It is a mental game now. I exactly repeated the words that our captain Imran Khan said to us at that time.”

“Boys are relaxed. They are playing tennis ball cricket inside, bowling bouncers to each and having chit-chats. So they look relaxed and that is how they should be,” he added. 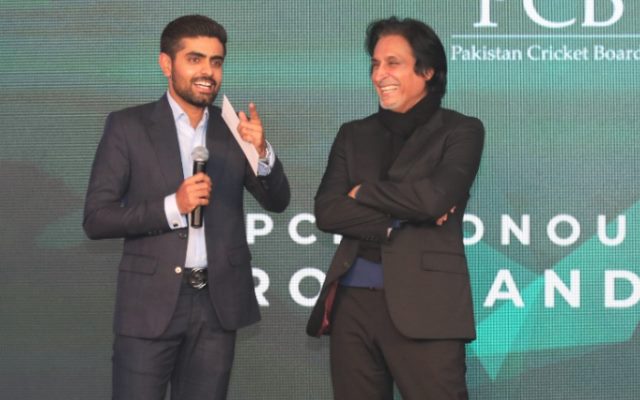 The former Pakistan batter also stated that he told Babar Azam that he has a great opportunity to leave behind a legacy by leading his team to victory in the final on Sunday. The PCB chairman said, “I’ve just told him (Babar) that he has the opportunity right now to achieve greatness and leave behind a legacy. If he lifts the World Cup, nothing could be bigger than that in his career.

Pakistan’s T20 World Cup 2022 campaign began with a four wicket loss to India at the MCG, the venue for the final. They were then stunned by Zimbabwe by one run. However, Pakistan beat Netherlands, South Africa and Bangladesh to reach the semi-final. They got some help from the Proteas, who lost to Netherlands and got knocked out, allowing Babar and co. to go through to the semis.

Babar and Rizwan overcame their poor form in the semi-final against New Zealand. Both cracked half-centuries as Pakistan chased 153 with seven wickets in hand. Shaheen Afridi’s return to form is also great news for Pakistan ahead of the final. After claiming just one wicket in Pakistan’s first three matches, he has claimed nine in their last three games.