With 20 overs to go in the chase at Rajkot, India needed around a run-a-ball, with eight wickets in hand. And yet, they ended up losing the game by 18 runs. The win by Proteas threw the theory of having wickets in hand to chase down

With 20 overs to go in the chase at Rajkot, India needed around a run-a-ball, with eight wickets in hand. And yet, they ended up losing the game by 18 runs. The win by Proteas threw the theory of having wickets in hand to chase down 8 to 9 runs in the last 10 overs out of the window. India were exactly in the same situation, but could not pull things off. This, in spite of having two batsmen, who had occupied the crease for a lengthy amount of time. As MS Dhoni stated at the post-match conference, the pitch got slower to bat on. But, India should still be disappointed at having been unable to chase down the target. 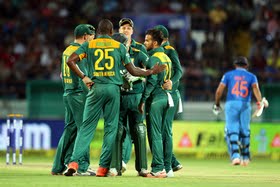 It was between the 31st and 40th over that India lost the match. Dhoni and Virat Kohli were strangled unable to rotate the strike. The South African pacers were smart enough to realise that the pitch wasn't the best one to play strokes at. The likes of Morne Morkel and Kagiso Rabada dug the ball in the middle of the pitch, and it rose awkwardly at the pace Indian batsmen are not used to. There was no timing at all in the strokes by Dhoni and Kohli although they gave it everything. In that ten over period that Dhoni and Kohli failed to keep the required rate under control, and India fell well behind in the game.

Although it was evident that the pitch was slowing down, Dhoni and Kohli still need to take some blame for being unable to keep the ship steady. Having realised that this was not the pitch to play big shots, the duo should have looked to rotate the strike. As mentioned earlier, the required rate was only six an over with 20 overs to go, and 45-50 runs in that period would have kept India in the game. Instead they scored at little over three runs an over, leaving too much to be done in the last 10 overs even though there were wickets in hand. India need to seriously have a look at their failed chase, which displayed a complete lack of plan, what with Ajinkya Rahane coming in at the unfamiliar position of number six.

The first 10 overs of the chase were also crucial. Again, India played out plenty of dot balls, the now out-of-form Shikhar Dhawan being the culprit. His failure to rotate the strike put too much pressure on Rohit Sharma, who did well to get timely big strokes. Still, there was only so much he could do, and Dhawan's blocks hurt India's progress. It did not help that India then lost Dhawan to a terrible stroke. The form of Suresh Raina has also hurt India's prospects in this match. Again, he came into a situation when India needed him to get the big runs, but was unsuccessful in providing the innings some much-needed impetus. Of course, it may help if he takes a few balls to get his eye in.

AlthoughIndia again lost a match from a winning position, South Africa deserve a lot of credit for the manner in which they bowled, Morkel in particular. He was incisive in all his spells, and never allowed India to relax. After Dhoni and Kohli had taken India into a decent position, he along with Rabada kept things extremely tight, and did not allow the duo any leeway. The short ball plan worked to perfection, and the lack of skills of two of India's best ODI batsmen had been exposed. Their dismissals, against the rising ball, was a surrender of sorts, an admission that they had no plan B in place. South Africa clearly outthought India at Rajkot.