Having already clinched the series 2-0, India will be keen to further extend its lead in the World Test Championship points table, by registering a 3-0

Having already clinched the series 2-0, India will be keen to further extend its lead in the World Test Championship points table, by registering a 3-0 whitewash against the Proteas. The visitors, in contrast, will look to show some fight and, at least, try and eke out a credible draw, if not a consolation win, at Ranchi.

There is very little that has gone wrong for India in the series. The decision to open the innings with Rohit Sharma at Vizag has proved to be a masterstroke, at least for now. Rohit hit twin hundreds on debut as an opener to cement his spot at the top of the order. Mayank Agarwal too has grabbed his opportunities, with a double hundred and a hundred in the two games so far.

The middle-order has done what has been expected of it, although both Cheteshwar Pujara and Ajinkya Rahane would be disappointed not to have got a hundred in the series so far. It is something both would target at Ranchi. As for Indian skipper Virat Kohli, he proved again at Pune that he is a class apart with a fantastic double hundred. 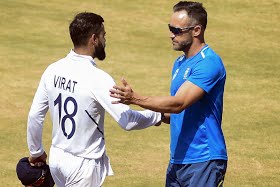 India’s bowling too looks healthy, even in absence of their star performer Jasprit Bumrah. Mohammed Shami has more than made up for Bumrah with some marvelous spells during the course of the series. And, while Ishant Sharma has been efficient, he would like a few more wickets to his name. Coming to the spinners, Ravichandran Ashwin and Ravindra Jadeja have carried on from where they left off in the previous series against South Africa.

South Africa has just not got much right in the series, forcing captain Faf du Plessis to concede that India have been a much better and stronger team. The travails of opener Aiden Markram, who got a pair at Pune and has now been ruled out of the third Test due to a wrist injury from punching a solid object, are symptomatic of South Africa’s woes in the series. Faf du Plessis has got a couple of hard-fought fifties, but it has been far from enough against an extremely strong Indian side at home. The visitors are desperate for runs from Theunis de Bruyn, Temba Bavuma, and would hope that Dean Elgar and Quinton de Kock have at least one more hundred left in them.

In the bowling department as well, South Africa has been dealt with a body blow as their most effective bowler, Keshav Maharaj has been ruled out of the final Test due to injury. In his absence, Senuran Muthusamy and Dane Piedt will have to lift their game. The pace trio of Kagiso Rabada, Vernon Philander and Anrich Nortje will also look forward to putting up a much-improved effort.