KKR Vs DD: Warner’s dismissal was the turning point

The opening game of the Indian Premier League (IPL) season six proved to be a disappointingly one-sided affair. A lot of credit for the same must go to a wonderful bowling performance from the Kolkata Knight Riders (KKR) on their home ground, the Eden Gardens.

The opening game of the Indian Premier League (IPL) season six proved to be a disappointingly one-sided affair. A lot of credit for the same must go to a wonderful bowling performance from the Kolkata Knight Riders (KKR) on their home ground, the Eden Gardens. Having decided to bowl first, it was imperative for Kolkata to get off to a good start with the ball. They got the perfect one, with Brett Lee cleaning up Delhi Daredevils’ opener with the very first ball of the season. What Kolkata did very well after that was to not allow the Delhi batsmen to settle down.

There was a threatening partnership building between David Warner and skipper Mahela Jayawardene. But Kolkata spinner Sunil Narine, continuing from last season, once stood out as the difference between the two sides. At one stage, Delhi seemed to be cruising at 44 for 1 in the sixth over, but this is where things turned around for Kolkata. Narine got of the dangerous looking Warner, and from thereon only one team was dominant. The West Indian spinner once again bowled with great verve to keep Kolkata on top. His bowling in the death overs was excellent as a result of which Delhi could not make any sort of progress in the last few overs. 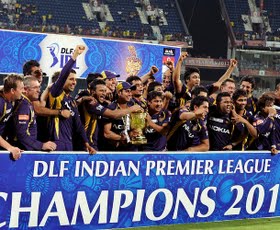 Delhi would have been very disappointed with their batting performance. There was only one score of note from the Delhi camp, and that came from their skipper Jayawardene. On a pitch where all his other batsmen struggled, the former Sri Lankan captain demonstrated how to bat on the difficult surface. His half-century was a sort of reassertion that he is comfortable playing any format of the game. Even though the conditions were tough, Delhi should have done better than the eventual score they ended up with –128. The fact that only two of their batsmen got into double figures was unacceptable.

To their credit, Kolkata were very good with the ball all round. Narine was undoubtedly the hero, but the others chipped in with crucial efforts as well. Although Lee went for plenty, he got big scalps of Chand and Jayawardene. His dismissal of Jayawardene in fact saved a few runs for the team. Medium pacer Rajat Bhatia also chipped in with a couple of wickets while Laxmipathy Balaji was economical as ever. In short, Kolkata maintained the squeeze on the Delhi batsmen right throughout.

To make a match of it, Delhi needed to get a few wickets early. Ashish Nehra was successful in sending back the aggressive Manvinder Bisla early, but Kolkata ensured there were no further hiccups. Captain Gautam Gambhir may struggle to put together a good knock in Tests, but come the IPL and he returns to his run-making spree. On Wednesday as well, his innings of 42 set up the win for his team. There was a brief worry for Kolkata when Gambhir and Manoj Tiwary fell in quick succession, but Eoin Morgan and the newly-married Yusuf Pathan saw them home with ease.

Turning point of the game: Warner’s wicket was the key. Following his dismissal, Delhi collapsed from 44 for 1 to 128 all out.