Rangana Herath took a match tally of 12 for 171 to bowl Sri Lanka to a 75-run win over England at Galle in the First Test.

Sri Lanka took less than 10 minutes to take the last two English wickets to clinch the Galle Test by 75 runs. This first Test Match was wrapped up in three days and two sessions!

Suraj Randiv took two wickets in two consecutive deliveries to wrap up the Test match after Tea. First he got James Anderson nicking a jumping off break to the Wicket Keeper and then had last man Monty Panesar dabbing at a turning delivery to the diving Dilshan at second slip. England got bowled out for 264 in 99 overs with Rangana Herath taking 6 for 97 and Suraj Randiv chipping in with 4 for 74. 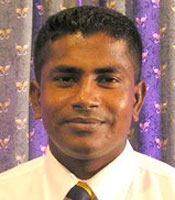 Rangana Herath who also claimed six wickets in the first innings got the Man of the Match for spinning Sri Lanka to a 75-run victory.

Tea Report : Sri Lanka are all set to win the Galle Test after reducing England to 259 for 8 by Tea! Rangana Herath has spun the match back into Sri Lanka’s control by taking six wickets while Suraj Randiv complemented him with two wickets so far. It looks like Jonathan Trott’s 7th Test century is going to be in vain!

Most part of the afternoon session saw England steadily reducing the target through the pair of Jonathan Trott and Matt Prior. Trott went onto score his 7th Test Century and England through a solid partnership was putting the pressure back on the hosts. However, against the run of play, Matt Prior (41 from 88 balls with 3 fours) got out in a freakish manner when his sweep shot off Herath hit the chest of Lahiru Thirimanne at shortleg and then rolled down into his hands to end an 81-run stand for the 5th wicket.

England needed 107 more runs to win when debutant Samit Patel joined Trott. Just when things were once again settling down, England went onto lose these two batsmen in the space of two overs! Samit Patel (9) got out driving Herath loosely to extra covers. In the next over, Jonathan Trott went back for a leg glance to Suraj Randiv’s jumping off break which forced an inside edge to leg slip. In no time, Graeme Swann (1) was dismissed by Herath at the stroke of Tea when he attempted a forcing sweep across the line and got lbw to a quicker arm ball.

Lunch Report : Sri Lanka seem to be the favourites to win the Galle Test atleast till Lunch after taking two key wickets in the morning session on Day 4. England would still believe that they have a chance as they have brought the target down to 163 more runs with six wickets in hand. The visitors do have three all-rounders waiting to come into the middle.

At lunch, England chasing a target of 340 are 177 for 4 in 70 overs with Jonathan Trott batting beautifully on 76 (from 193 balls with 9 fours) along with Wicket Keeper Matt Prior (15* from 40 balls). Ian Bell was the second batsman to be dismissed in the morning session. Bell (13) was dismissed lbw by Rangana Herath after missing a predetermined paddle sweep to a full length delivery which would have gone onto hit the off stump.