NZ vs AUS 2016 ODI Series Stats: Hosts New Zealand beat World champions Australia 2-1, in a three-match series, in what was Brendon McCullum's final one-day assignment. Here's a look at the top performances in the series by both batsmen and bowlers.

Hosts New Zealand beat World champions Australia 2-1, in a three-match series, in what was Brendon McCullum's final one-day assignment. Here's a look at the top performances in the series by both batsmen and bowlers.

Martin Guptill: The Kiwi opener continued his golden run against the Aussies as well. He finished the series with a tally of 180 runs, at an even average of 60, and an impressive strike rate of 99. Guptill crossed the half-century mark twice during the course of three games. He had a highest score of 90. 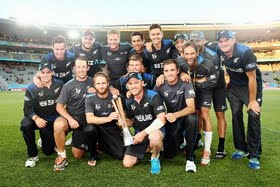 Mitchell Marsh: Although his efforts came in a losing cause, Marsh was the most valuable player in the series as his all-round skills came to the fore. He finished the series at 110 runs at an average of 55, with one fifty. With the ball he claimed, seven scalps at a thrifty average of 14.4. Marsh's unbeaten 69 in the second game was instrumental in Australia squaring the series. And it wa his dismissal in the final ODI that turned the game. With the ball, Marsh struck crucial blows. A coming of age performance from the all-rounder.

Brendon McCullum: The New Zealand skipper signed off on a high, playing the kind of knocks which have created his legend. McCullum smashed 119 runs at a stupendous strike rate of 175 to get his team off to dazzling starts. He finished the series with a highest of 47, and a decent average of 39.66

David Warner: The flamboyant Aussie opener was among the runs, but it could not result in a series win for the visitors. Warner ended the series with 126 runs at an average of 42 and a best of 98. His strike rate remained impressive at 121.

Grant Elliott: The experienced bat held the innings well for the Kiwis in the middle order. He scored 103 runs at an average of 34 with a best of 50. Elliott's strike rate of 81 was on the lower side, but the situation demanded the same.

Matt Henry: The Kiwi was the most impressive of bowlers across teams. He struck deadly blows during the course of the series, ending with eight wickets at an average of 19.75 and an excellent strike rate of 19.5. His best in the series was 3 for 41 while his economy rate was just over 6.

Josh Hazelwood: The Aussie medium pacer claimed seven wickets at an average of 24.85 and a strike rather of 25.7. Hazelwood had a best of 3 for 61, and an economy rate of 5.8.

Mitchell Santner: Having played just two games, Santner finished with five wickets at an average of 9.4, an excellent economy rate of 4.5, and a brilliant strike rate of 12.4.

Trent Boult: Like Santner, he also featured in two games, and impressed with four scalps at an average of 26, an economy rate of 6.3 and a strike rate of 24.7. His best bowling figures in the series were 3 for 38.