Deccan Chargers slipped to their 9th defeat in 12 matches of the IPL 5 with their original home venue – the Rajiv Gandhi International Stadium in Uppal, Hyderabad still proving to be a disaster for them. Kings XI Punjab who defeated the Chargers by a comprehensive margin of 25 runs are now into the fifth position having the same number of points as the Rajasthan Royals.

Needing 171 to win, Deccan Chargers on what turned out to be a seaming track were decently placed at 70 for 2 in 10 overs. However, David Hussey brought himself into the attack and got the wickets of Daniel Harris (30 from 29 balls) and the dangerous Cameron White (8) in one single over to change the fortunes of the Chargers.

Skipper Kumar Sangakkara (4) got caught behind brilliantly by Wicket Keeper Nitin Saini to a delivery that seamed away magically from Praveen Kumar to have DC at 74 for 5 in 11.2 overs! After Sangakkara’s exit, it was a mere formality for Kings XI Punjab to complete for their crushing victory. The Chargers stretched the match by finishing at 145 for 8.

Praveen Kumar found success with 2 for 15 in 4 overs while Azhar Mahmood looked impressive with his seam and swing bowling though he went wicketless. Once again, Parvinder Awana showed his potential taking 2 for 27. The Man of the Match award went to Mandeep Singh for his 75 from 48 balls. 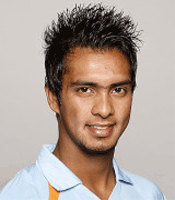 Kings XI Punjab have ended up with a competitive total of 170 for 5 against Deccan Chargers. Opener Mandeep Singh was the top scorer for Kings XI Punjab with a fluent 75 (from 48 balls with 8 fours and 3 sixes). Towards the end, South African David Miller scored a nice cameo of 28* from 18 balls with 3 fours and a six.

Toss and Teams: Deccan Chargers have won the toss and asked Kings XI Punjab to bat first at the Rajiv Gandhi International Stadium in the outskirts in Hyderabad. Adam Gilchrist continues to sit out because of a hamstring injury leaving David Hussey to lead Kings XI Punjab yet again.

Kings XI Punjab have brought in David Miller in the place of Ryan Harris while making a couple of other changes. For the Deccan Chargers, strike bowler Dale Steyn is out with an injury and replacing him is going to be Rusty Theron.