The rise of India’s pacers bowlers has been the big talking point of 2019 in cricket. Even till a couple of seasons back, India was heavily dependent on Ravichandran Ashwin

The rise of India’s pacers bowlers has been the big talking point of 2019 in cricket. Even till a couple of seasons back, India was heavily dependent on Ravichandran Ashwin and Ravindra Jadeja to win them matches at home, even as they struggled abroad since their fast bowlers could not deliver.

All that has changed over the last year, with Indian pacers dominating both at home and abroad. While Jasprit Bumrah and Mohammed Shami played pivotal roles in India’s historic Test series win Down Under, Ishant Sharma joined the party in West Indies while Umesh Yadav ensured India did not miss Bumrah in the home Tests.

As a combination, the pacers have proved to be deadly and, in fact, ended up picking all the wickets to fall in the Day-Night Test at Kolkata. Former India skipper and director Rahul Dravid is glad to see the change and opines that the current crop will inspire youngsters to take up fast bowling. 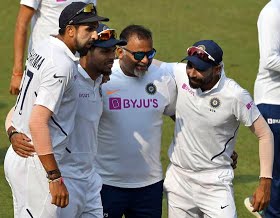 “What Ishant, Shami, Umesh, Bhuvneshwar, and Bumrah are doing is they are actually in a way becoming role models for a younger generation of boys, who believe now they can be successful as fast bowlers in India. I think it is great to see,” Dravid was quoted as saying by Sportstar in Lucknow, where India U-19 were facing Afghanistan U-19 side, at the Ekana Stadium.

The 46-year-old legend, who amassed 13,288 runs in 164 Tests and over 10,000 in ODIs, also feels that IPL teams are missing a trick by not employing enough local coaches, “Honestly, there are so many Indian players in the IPL, there’s so much local knowledge. I feel a lot of teams could actually benefit from using a lot of our Indian coaches in the IPL. They know the Indian players better, they understand them better.

“Every IPL team has at least 17-18 Indian players. It’s my personal view, but I would love to see a lot of our boys get the opportunity to be in and around that environment. Hopefully, we can work with some teams to try and ensure that,” Dravid, who played former IPL champions Rajasthan Royals, added.

It was under Dravid as a coach that the Indian U-19 team won the World Cup last year. He expressed confidence that the country will do well in the 2021 edition as well. “Now, at the under-19 level, we have very good fast bowlers. Last time, we had three of them – Kamlesh (Nagarkoti), Shivam (Mavi) and Ishan (Porel). This year, you will also see some good fast bowlers in the team. That’s been fantastic,” the Wall of Indian cricket went on to say.