A wonderfully in-form New Zealand will take on the ever unpredictable Pakistan in match number 33 of World Cup 2019 at Edgbaston on Wednesday.

A wonderfully in-form New Zealand will take on the ever unpredictable Pakistan in match number 33 of World Cup 2019 at Edgbaston on Wednesday. New Zealand is yet to drop a game in the World Cup while Pakistan goes in having managed to knock out South Africa with a victory in the previous game.

Although they made it to 2015 final, New Zealand has never been World Cup favorites. This time though, under Kane Williamson, they have looked one of the most commanding teams in the tournament so far. The skipper has led from the front, with hundreds in contrasting circumstances, in a tense chase against South Africa, and they when looking to set a target against West Indies, after the Kiwis lost their openers early.

Their all-around strength is what has worked very well in New Zealand's favor, and has allowed them to swim out of tense situations, like against West Indies. They would still like Martin Guptill and Colin Munro to get among the runs though. The form of Ross Taylor remains encouraging even as Colin de Grandhomme is proving to be a big asset with his all-around skills. In the bowling department, Lockie Ferguson has made a distinct impact with his speed and wicket-taking ability. Trent Boult, Matt Henry, and James Neesham continue to chip in impressively. 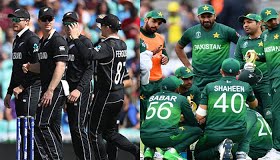 The impressive win against South Africa has kept Pakistan alive but considering the early losses in the tournament, they cannot afford many slips. Haris Sohail made the big difference against the Proteas as he single-handedly lifted the side to a winning position. Dangerous opener Fakhar Zaman has been among the runs but he hasn't quite set the tournament on fire, as was expected of him.

In the bowling department, the decision to retain Mohammad Amir for the World Cup is proving to be the big game changer for Pakistan. He has come into his own in the tournament, and it has made Pakistan bowling a highly potent force. Wahab Riaz may be proving expensive but, with his experience, he's just doing enough to aid the team with wickets at key moments. With their ability to upset the best on their day, Pakistan will be raring to have a go at the Kiwis.