Having defeated Bangladesh 3-0 in the just-concluded T20 series, Afghanistan are confident of taking on India in their debut Test.

Having defeated Bangladesh 3-0 in the just-concluded T20 series, Afghanistan are confident of taking on India in their debut Test starting June 14 at the M Chinnaswamy Stadium in Bengaluru. 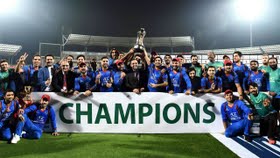 Speaking about the challenge, Afghanistan skipper Asghar Stanikzai was quoted as saying in an IANS report, "Great preparation for the Test match against India - the morale is high.”

"Last couple of years we have performed well. We want to achieve it for Afghanistan. You see the batsmen, bowlers are all in good form,” Stanikzai further told IANS.

Leg-spinner Rashid Khan, the star of the show against Bangladesh, is also looking forward to make an impression.

"Full credit to my fitness, if you're fit, you can deliver in any department; it doesn't matter whether I'm playing in league cricket or the national team, I just want to enjoy," he was quoted as saying in the report.