It hurts when you get beaten, particularly in England: Justin Langer

Australia ended their tour of England without a single win following a loss in the one-off T20. But, an optimistic Justin Lange

Australia ended their tour of England without a single win following a loss in the one-off T20. But, an optimistic Justin Langer said the experience will only make the team stronger.

"Light at the end of the tunnel, there's no doubt about that. We knew it was going to be a big job knowing where we came from in South Africa,” Langer was quoted as saying in a Cricinfo report.

"There's been some great learning and some real positives that have come from this trip. On the surface it looks like a complete disaster but we have talked about a team for the World Cup and the Ashes and I think we have unlocked a few answers, but it hurts when you get beaten, particularly in England, Langer admitted. 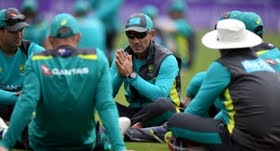 Langer also remembered his tough initiation in international cricket, looking at the current woes of Australia. "My first Test match was against the West Indies and it was pretty scary. You faced four fast West Indians and you are a skinny kid. I remember David Boon saying 'Test cricket will never get tougher than this,” the former left-hander recalled.