At the start of Indian T20 Cricket 2019, if one were to predict that Mumbai and Chennai would make it to the final, no one would have been surprised

While both have been equally successful teams, Mumbai has a significant advantage going into the final. The teams have squared off three times this season and, on all three occasions, Rohit Sharma's men have emerged triumphant. That's not all. Mumbai have faced Chennai thrice in the finals before, and on two occasions they have emerged triumphant. 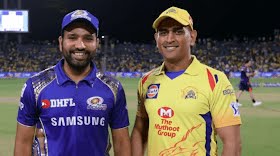 It is the batting against Mumbai that has constantly faltered as far as Chennai is concerned. And the only way they can set that straight is by performing well on the big day. There are positives for sure, with both Faf du Plessis and Shane Watson getting fifties in the previous game. The form of Suresh Raina though remains a worry and the middle order remains wobbly with Ambati Rayudu not being able to perform. A lot could thus again depend on Dhoni's exploits down the order.

Bowling has been Chennai's stronger suit this season, having rescued them from precarious situations many times. In the previous games against Mumbai through their batsmen just haven't done enough to support their bowlers. Imran Tahir would still look to deliver another fine effort in the final, with support from Harbhajan Singh and Ravindra Jadeja. Whether it will be enough though remains to be seen.

Mumbai have been fantastic this season. Unlike on some previous occasions, they haven't had to huff and puff their way to the final. A few players have been key to Mumbai's solid run. Hardik Pandya for one has really channeled all the frustration of the Koffee with Karan controversy and transferred it into some high-quality performances. He has been exceptional down the order with his big-hitting while contributing impressively with the ball too.

His brother Krunal Pandya has done a super shackling job, claiming 11 wickets at an economy rate of under 7. Yet again though a lot will depend on Jasprit Bumrah. The fast bowler would be keen to give it all he has one final time before the World Cup. It has helped that his mentor Lasith Malinga has found form as well. Last but not least, the in-form openers Rohit Sharma and Quinton de Kock would be expected to deliver and take the pressure off on the big day.